WWW.DOVERFORUM.COM/SEA-NEWS
Sea Pictures from DOVER: Featuring all the ships that come and go and work at the Port of Dover ..
... with some further coverage of the surrounding ports.

Sea News Dover
Use our SEARCH ENGINE below to find all sorts on the SEA NEWS pages....type in the topic and away you go,
or if you have the post number, just type it in the Search Box, more than - 6750 - nautical posts now.
Posts are welcome. just click 'Add Your Comment' below.
Upload a Max of 5 pictures....Many Thanks.
Sea News Editor Paul Boland - send info or pix to dover7@msn.com. Always welcome. 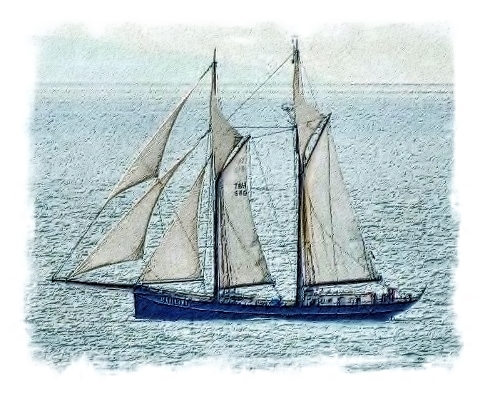 To show your pictures at their best..it could be worthwhile resizing before posting to 860 pixels wide. Our new standard size.
All pictures on these pages are the copyright of the owners and must not be reproduced without permission.
Comments Page:   1   2   3   ...   302   303   304   305   306   ...   317   318   319     |  ⇒ Add your comment
Your Comments (Newest First):
Post 354
Kevin Charles, Dover
Port now open. Four ferries spent the night at sea - Spirit of Britain and Pride of Canterbury off Dover, and the Delft Seaways and Dunkerque Seaways off the French Coast. It would have been a long night for passengers and crew in very uncomfortable conditions.

Tuesday, 24 December 2013 - 06:54
Post 353
Jan Higgins, Dover
Four Ferries apparently stuck out at sea in this awful weather according to the BBC.

doubt it is much better on the dover straits as kevin has said, hopefully things will calm down in the early hours so that crew and passengers can continue their journey in safety.

Post 351
Kevin Charles, Dover
The port is now closed as wind gusts to 75mph. Ferries are sheltering off the Downs and the French coast. The AIDAsol cruise ship is just passing Dover on a very rough start to their Christmas cruise.

To the P&O Choir: We salute you, Dover is very proud this morning

I sat on the edge of my seat the whole hour, nail biting stuff for sure. All three Choirs did very well indeed, I thought for one minute that CITIBank had got it especially with their Gospel Chorus piece but what joy to hear P&0's name called as the winner.

And how awesome is Ely Cathedral! Gareth Malone, you have my vote

Just got back from town, be careful out there, very blustery & the winds are brewing just as forecasted.

Post 348
JanT, Dover
In a truly splendid setting a winning performance by P&O Choir with Gareth Malone at the helm,this has been a program that has been a real pleasure to watch and hopefully given Dover a feelgood factor.

How this was kept under wrarps till the program was aired must have been tough, and I guess we must not forget the other Choirs who did so well.

But Dover's P&O came out the winners

Below some great pictures of our winners

Post 347
PaulB, Dover
Well can you believe it !!! P&O won The Choir on BBC2 in fantastic style. Truly brilliant ! Here we are with a few pictures to enjoy.. as seen on TV. 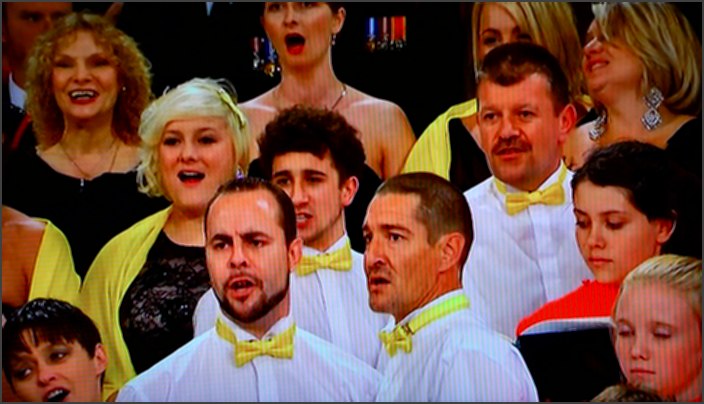 Yes indeed..They WON! Despite stiff opposition in this the final from CITIbank and the Cheshire Fire Service, our local boys and girls from P&O won through in spectacular style and in equally spectacular surroundings. It was highly stressful for them performing in the beautiful Ely Cathedral in Cambridgeshire as the venue was hugely packed to the proverbial rafters and of course with the added stress of having sublime 'professional' choristers also performing. But they did supremely well, they held their nerve and their performance together and won through. They sounded magnificent. Everybody was thrilled including Choirmaster Gareth Malone.
The humble viewer watching here in downtown Dover was under stress himself as I'm sure were many of you...all hoping P&O would win. And win they did. We all went through the ringer and the mangle together.
Picture above shows a section of the choir. 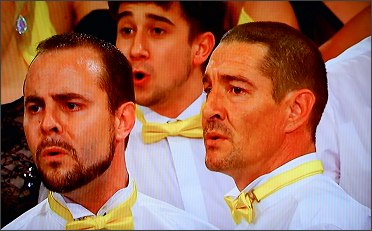 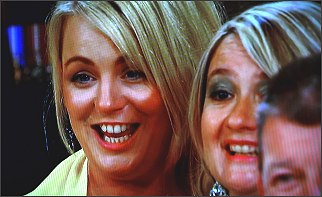 The brothers above fronted last nights performance and they were great. The girls were overjoyed to win.
A huge well done to all. A proud moment for P&O and for Dover. A PR coup for sure all round.
More info and pictures from earlier performances down and/or over the page

Thanks for the info Colette. Disappointing not to get a chance to see the AIDA Sol which would have been a bit special for this time of the year...but large cruise liners cannot get into harbour in turbulent conditions, as we have seen before. So as not to deprive ourselves too much, here is an image of the ship herself from April 2011 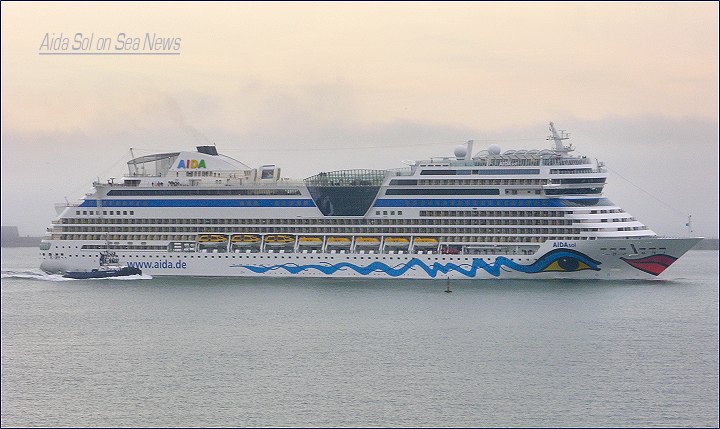 Yes very rough conditions Howard but when the sun came through for a tiny brief interlude I was lucky to have the Rodin approaching in full view. Glad you enjoyed the Choir.

Post 345
howard mcsweeney, dover
great photos of the tempest on the Dover approaches paul, now to relax and watch the final episode of "the choir"!!

Sunday, 22 December 2013 - 21:10
Post 344
ColetteB, Dover
Latest News: The AIDASol scheduled to arrive in Dover tomorrow 23rd December will now NOT be cruising into Dover as planned. So we have seen the last of the cruise ships this season.

We begin again next year in March with the very same AIDASol on Thursday March 6th 2014 at CT2.

Merry Christmas one and all 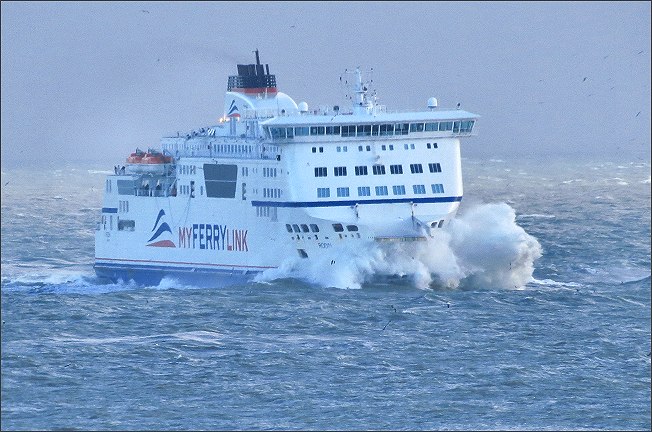 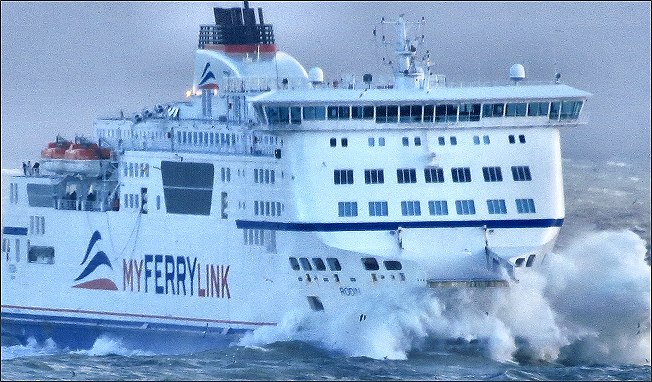 Some respite in the grisly oul weather allowed me to get these shots at long range of the MFL Rodin battling homeward through the very rough seas. Pictures taken just after midday. The second picture is a closer crop of the first. I cropped and enlarged a tad so you can see up close ..and you can hardly believe it... hardy souls braving the windswept weatherbeaten and maybe even dangerous decks.
Now, they are either ill


See the note in the post below re THE CHOIR tonight.

Post 342
PaulB, Dover
Just a reminder that THE CHOIR Christmas Final is on tonight at 9PM BBC2.
They have switched to sunday for the final..
Can the ultra local P&O team win it?? 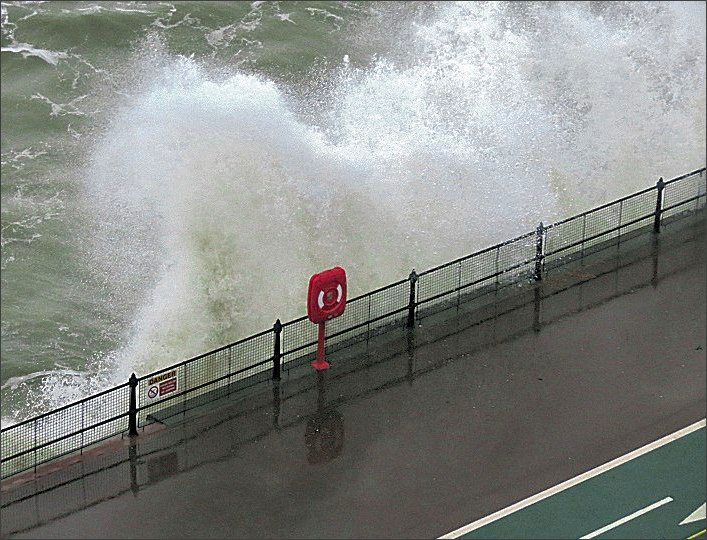 The scene yesterday. It looks almost refreshing doesn't it? But perhaps on another day, maybe when the temperature is soaring into the mid thirties.
But not right now. The grim faced weatherman tells us there is much more turbulence to come. Some of it quite severe.

Post 340
PaulB, Dover
Took the following pictures about 3.30 - 3.40pm today saturday. Already it looks much later than it actually is because it is very dark and very gloomy...and of course very rough. Must be at least a Force 8 in the channel. Had a go at trying to get some pictures even though knew the quality wouldnt be the best, all in an effort to show just how difficult it is today for the crews and everyone else involved. 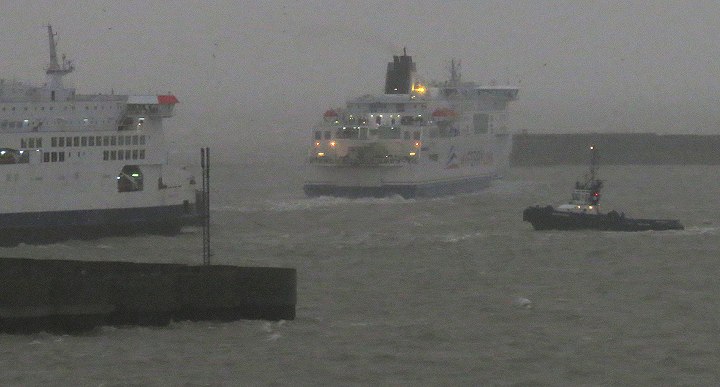 Above and below the My Ferry Link vessel gets underway..and below you can see the tugboat is beginning to pull the P&O off Dover 9. 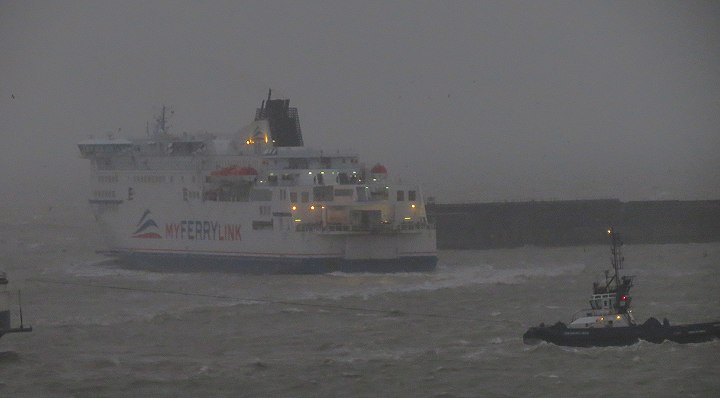 Post 339
PaulB, Dover
The efforts of the Port staff and ferry crews will be put to the test again today Howard..as its a fairly rough and miserable old day once more. Very blustery. A couple of pictures below from a few minutes ago as I write. Nothing special but show the state of play at the moment.. 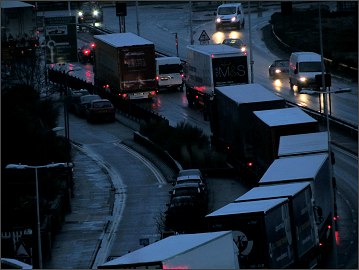 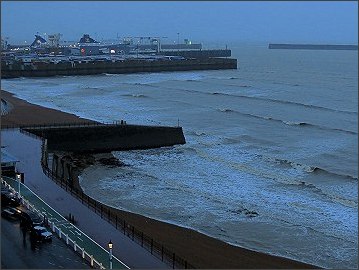 As you can see there appears to be a bit of a backlog of trucks trying to get away but the Port is still open and working relatively well although there are some inevitable delays. The tugboats are in operation.

Post 338
howard mcsweeney, Dover
Mr Waggott is spot on in his praise for those "at the coalface", dover port keeps running when everywhere else grinds to a halt.

i know a couple of chaps, not much younger than me, that do the business out in the open and they just shrug their shoulders and smile when i comment on their jobs.

Post 337
PaulB, Dover
LATEST from the PORT : "When it reached the resilient Port of Dover, it was game over for the Storm!"

The Port of Dover remained open and operational throughout last nights storm... as the professionalism and dedication of the Ports tug crews working together with the experienced ferry crews under the expert eye of Port Control shone through.

The teamwork displayed by everyone associated with the Port ensured that even with such bad conditions as were witnessed during the cold, wet and windy hours of darkness, the Port of Dover was able to ensure that all of its customers were safe and still able to get on their way.

Tim Waggott, Chief Executive, Port of Dover, said: It is such an important time of year for people heading off for Christmas and lorries delivering goods to the shops in order that they are stocked for the festive season. Knowing that the Port of Dover is here, carrying on steadfast and resolute against the elements, is surely of great comfort and pride for our nation and our community.

In fact, the Port managed to handle more people and more freight traffic than on the same day last year. 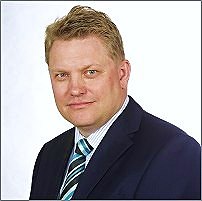 Mr Waggott added: It is on nights like this that you come to realise just how good the people that work here are. They put Dover on the map for all the right reasons and I am proud to say so.

Post 336
PaulB, Dover
Yes indeed it was a rough oul night Howard but the Port kept right on going...but it was a tough game out there last night and no mistake. Frightening is a word that could describe it. How they keep going I just dont know. I take my hat off to the guys in the thick of the action. Yours trulys flat rocked worryingly, more so than the previous storm but I guess it depends on wind direction and how it hits.

Here now with the official statement just in via email..

The Port of Dover operated throughout the night, the ferries being assisted by the Port's tug crews. The safety of customers and staff remained the Port's top priority as the tugs ensured that ferries berthed safely in the high winds.
Sea conditions have now returned to moderate with a moderate westerly breeze, force 4, and good visibility. 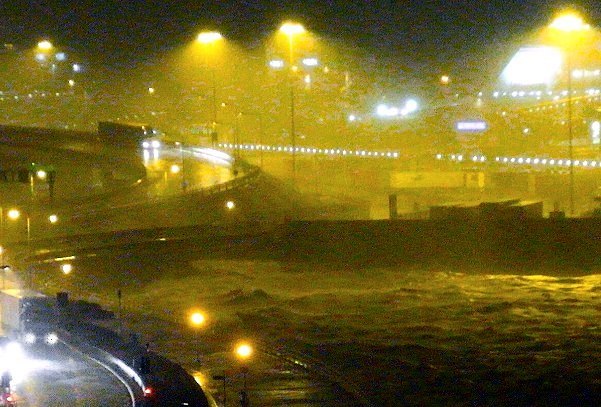 The picture above was not taken last night as it was too dangerous to open a window in the midst of it all, but this older pic gives a rough idea as just how..well how rough it can get. All feels a great deal calmer this morning.

Post 335
howard mcsweeney, Dover
plenty of rain and a fair wind but not enough to cause disruption to the hardy souls in the eastern dock going by previous experience.


spent the evening alternating between the front and back doors so that the cat could reach a decision on what was the best option.


In anticipation of the high winds (potentially in excess of 50 knots) which are forecast for tonight (Wednesday 18th December) between 1900hrs and 0300hrs, the Port of Dover is advising its customers to contact their ferry operator and check the Ports website (www.doverport.co.uk) or twitter account (@Port_of_Dover) for the latest information on Channel crossings.

The safety of customers and staff is our priority and we are monitoring the situation closely and making preparations to ensure that systems are in place to minimise any disruption and delays to travellers.

We apologise for any inconvenience this may cause and thank you for your patience.

Post 333
JanT, Dover
The Choir has certainly opened up some refreshing television with this programme and Gareth Malone has shown that the work place holds many talented people, if not for this programme none of us would have seen.

Last nights must have set many a foot tapping and to see the P&O Choir do so well, we here in Dover have fingers crossed that they can win.

It will be sad to see it finish but that is not the last we see of Gareth Malone,he will be conducting Kings College Choir in Cambridge BBC2 on Christmas eve,for those of us who have been watching him over the last few weeks.