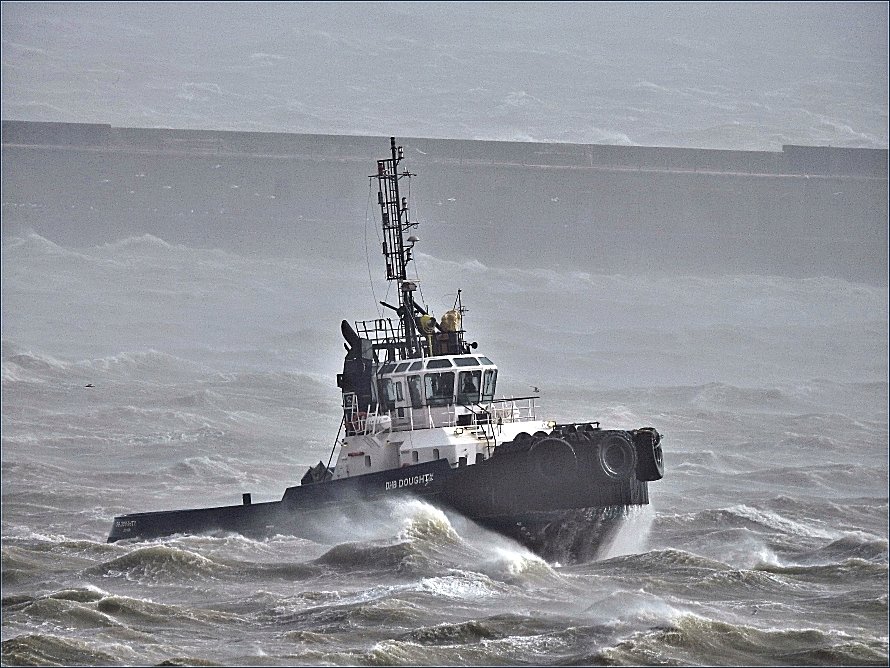 Storm Eunice: Another picture to add there...this time showing a closer shot of the tug Doughty working it in the fierce wind...you can see the struggle there. The harbour wall askew as yours truly couldn't hold the camera steady. We understand, all too grimly, that there is another storm on the way....well.... batten down the hatches yet again...
See also below.... 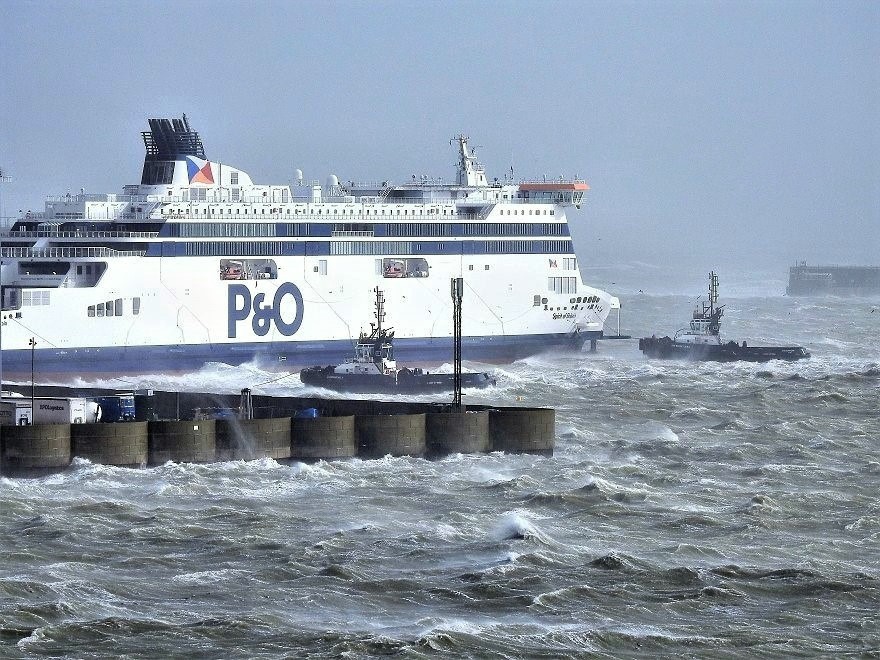 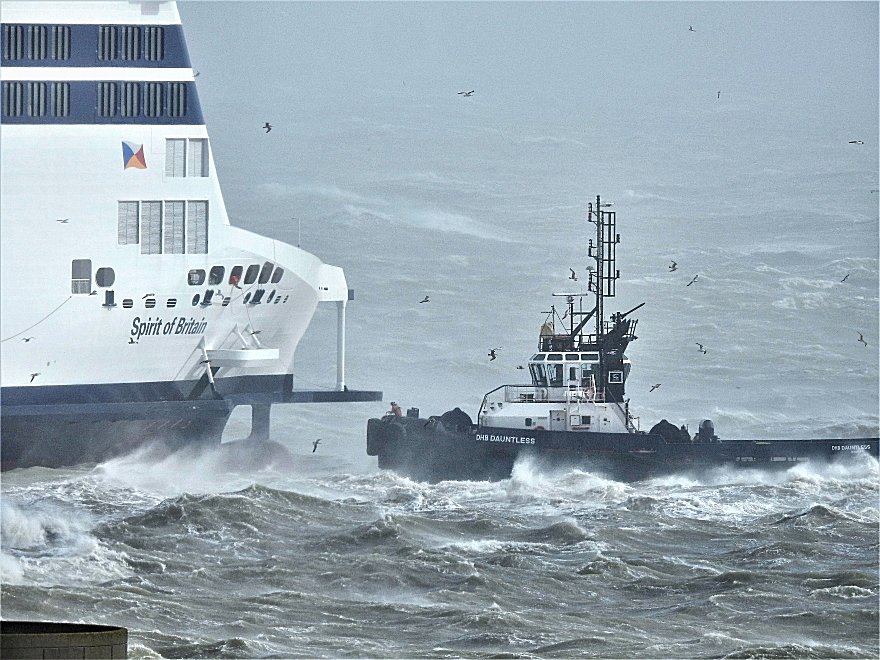 Storm Eunice is already upon us in the shots above and you can see the ferry Spirit of Britain still intending to carry on...it really is the spirit of Britain! Both tugs lending much needed assistance as she fights to break free from pier Dover 9 in the teeth of the powerful howling gale.

Pictures taken at 12.30 on Friday the 18th.
Tugs: Doughty and Dauntless
...and they needed to be doughty and dauntless... 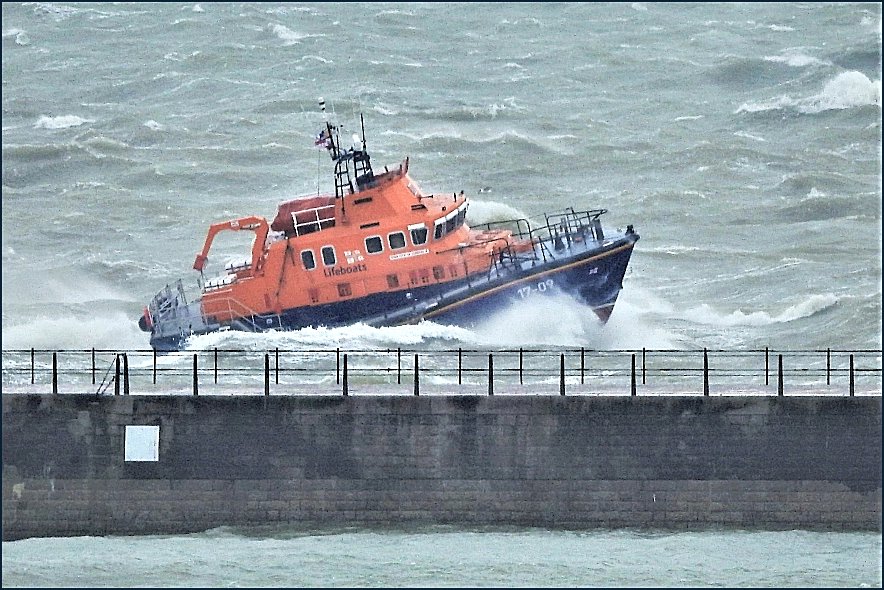 Just adding a final shot from the Lifeboat sequence above there...we just took a short burst of pix before she disappeared temporarily out of our immediate vision .... finally re-entering Port a short time later. Other pictures below... 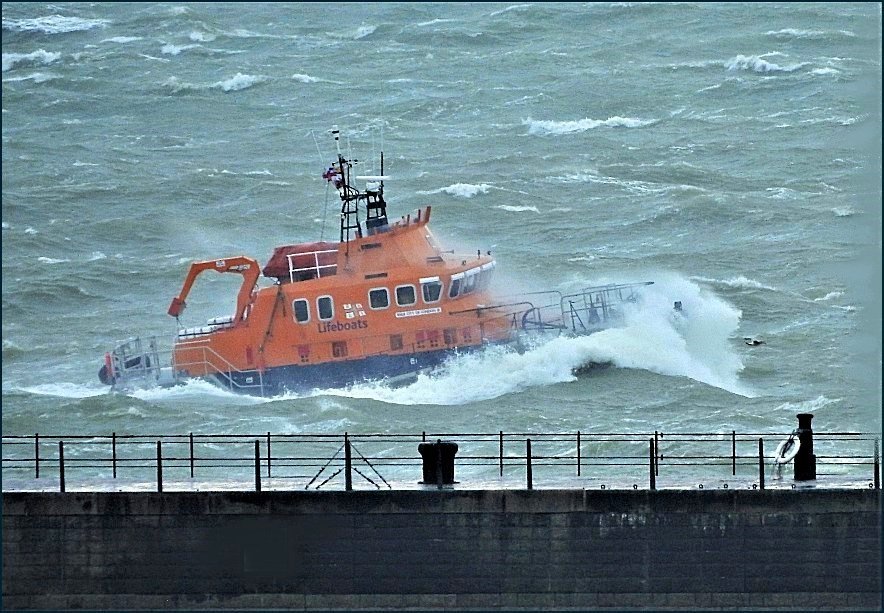 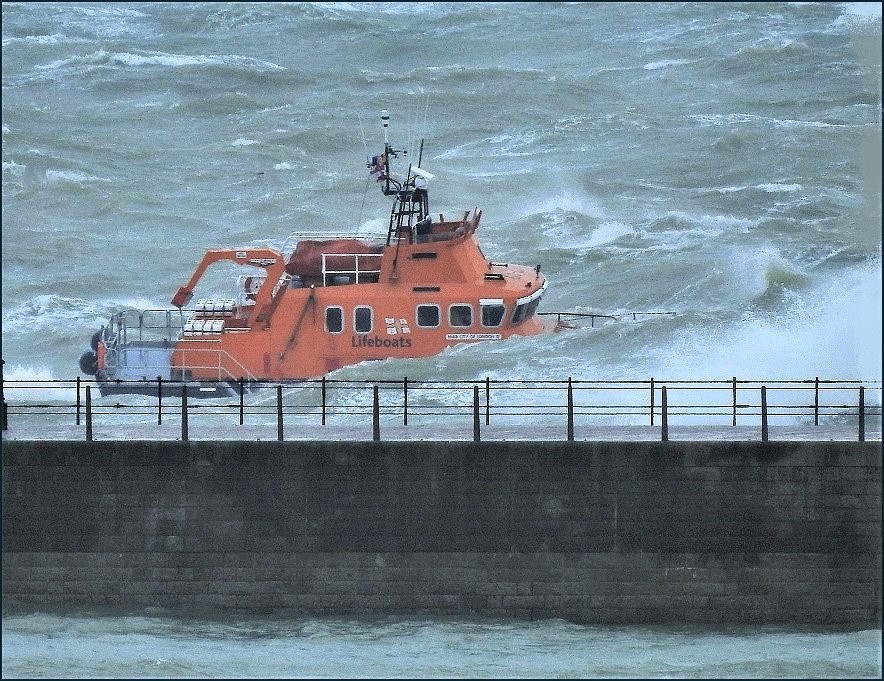 Dover Lifeboat: These pictures were taken earlier this week as the Dover Lifeboat battled to return to Port here in Dover in some fierce weather. The wild weather goes on of course...with storm force winds approaching as we write, courtesy of Eunice, these pictures are very appropriate at this time. The Lifeboat guys do a great job, let's hope they all stay safe in the appalling conditions. 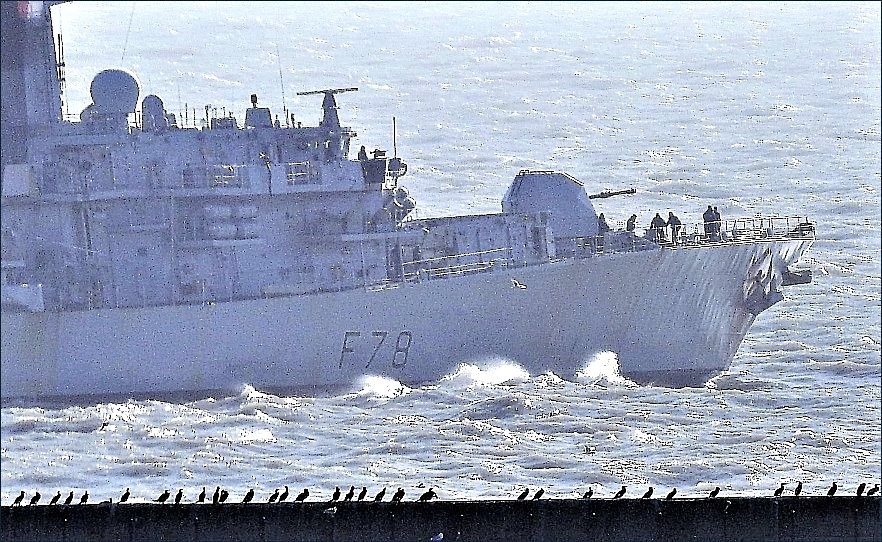 HMS KENT departs DOVER - The Cormorants lingering on the Port's breakwater had the best view .... 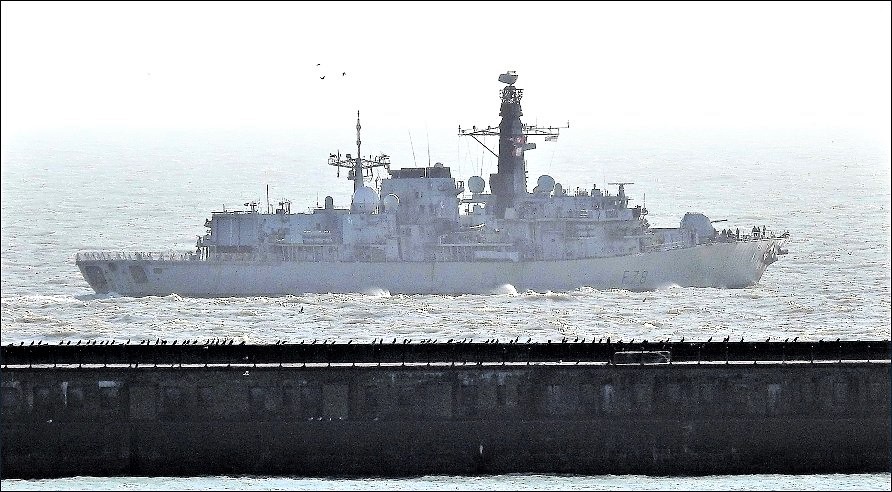 We see the Royal Navy's HMS Kent moving away in the pix today...she left mid-morning monday (14 Feb) following a three day stay. Alas she left during a dazzling spell of light on the water so pix were difficult but we captured her hazily in the two shown here, and we may have a close up later if its workable. 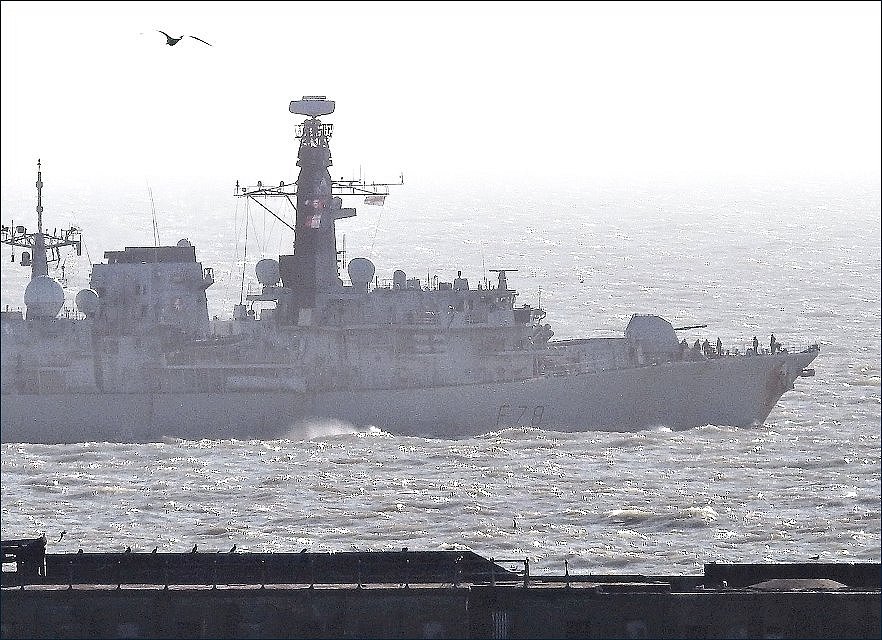 Also just to add this extra one below showing a longer range shot of Lila Houston ( see also the post below ) making her distant way to Vlissingen .... 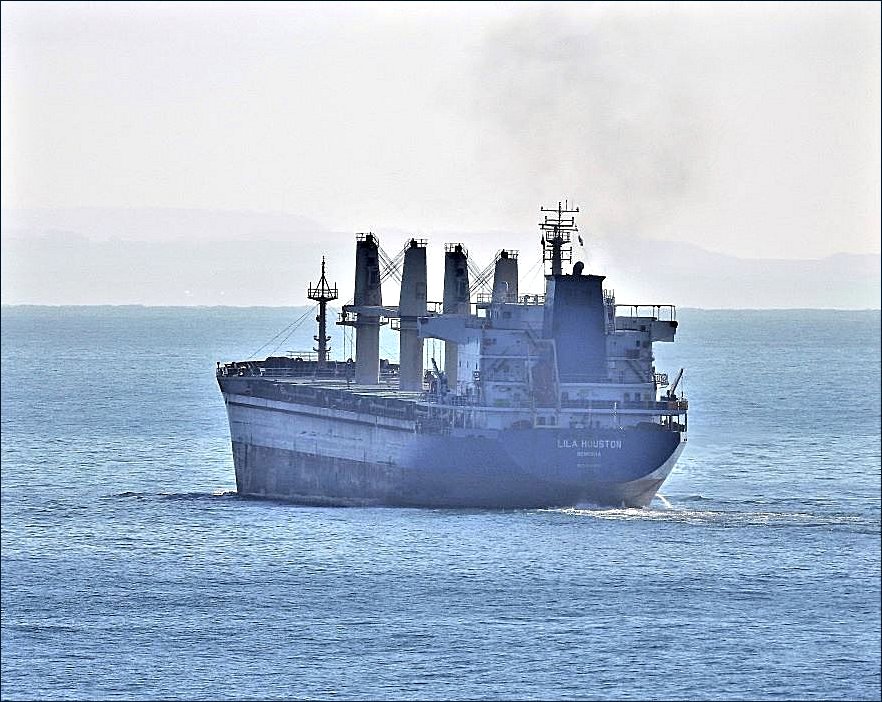 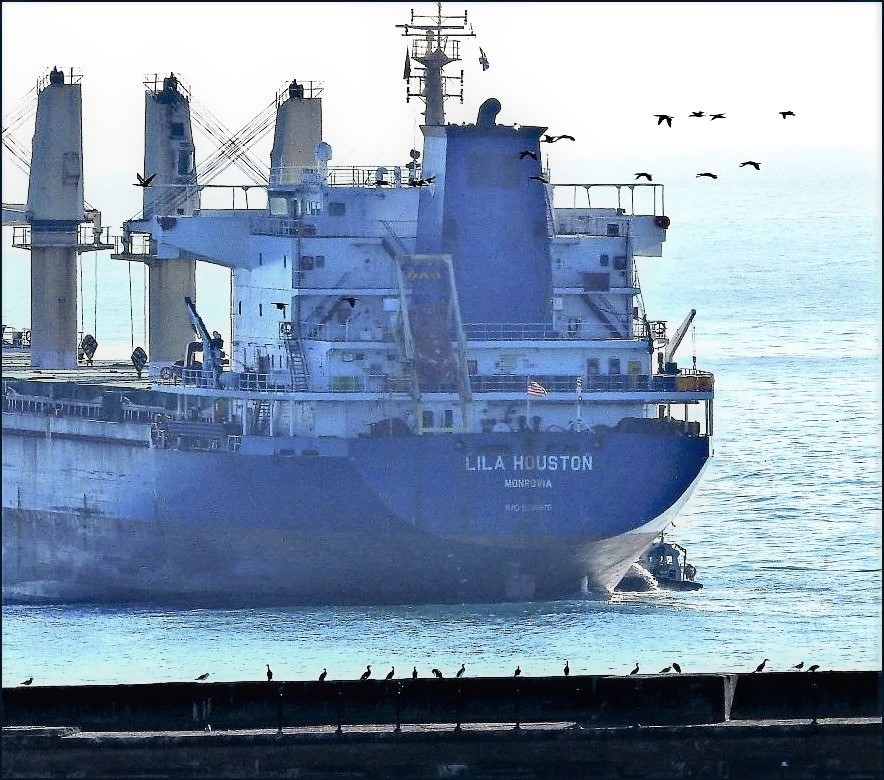 Bulk carrier Lila Houston sets off for Vlissingen on misty Friday 11th after a long stint in Port here. You can see her above there causing some mild havoc and disturbance to the sleepy cormorants on the breakwater (hundreds of them nowadays). Bottom right you can just see the pilot boat readying to depart..... another job well done... 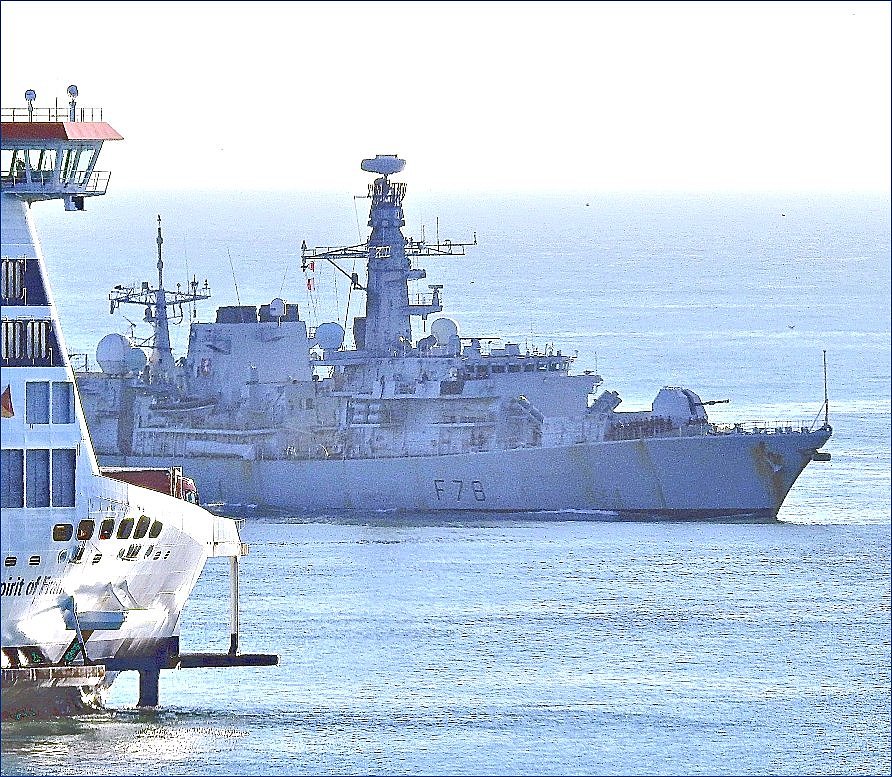 Port of Dover Chief Executive, Doug Bannister, said: The Port is delighted to welcome HMS Kent back to Dover and her home county this weekend for the first time since 2020. We are pleased to be hosting the ship and her company as they conduct engagements with community groups, including the Sea Cadets, and visit local sites such as Dover Castle.

HMS KENT is the 12th Ship to bear the name. She was built in Clyde, Scotland, and was launched on the 27th May 1998 by Princess Alexandra of Kent. 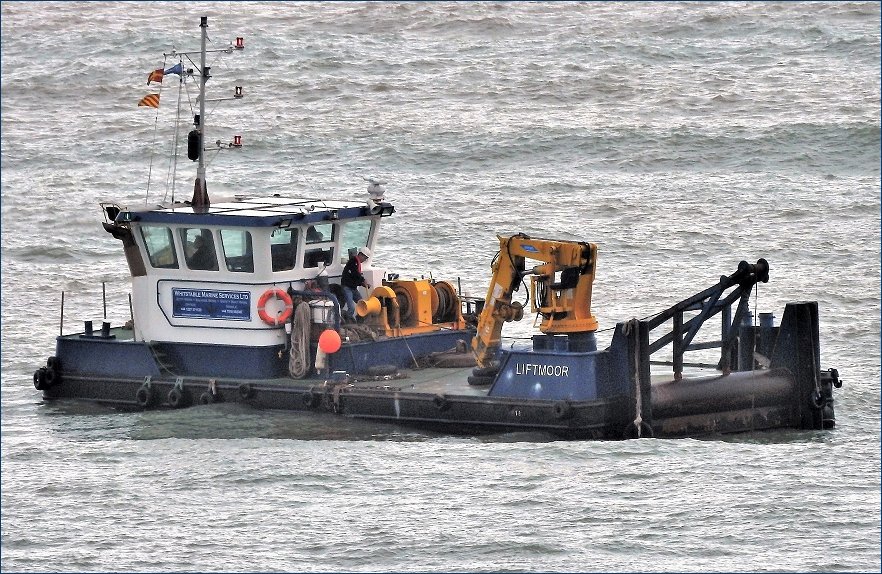 As promised the close up shot above of the hard working Liftmoor...see below.... 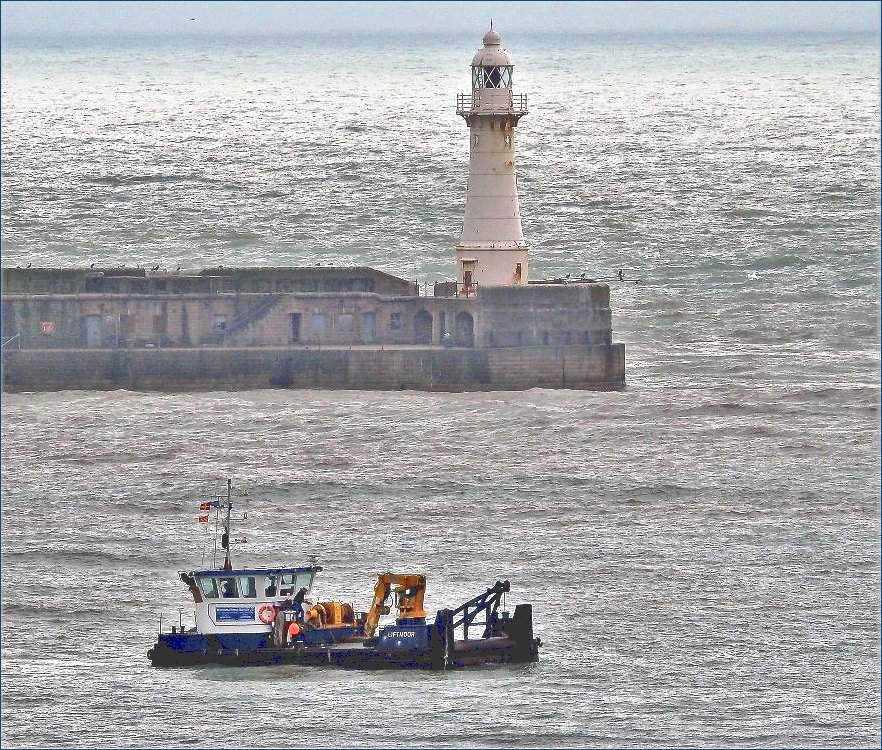 The Whitstable Marine Services Ltd workboat Liftmoor as seen above, was busy working in the harbour in recent days...
good to get a pic of that one, we aim to have a closer shot shortly too....
also busy in recent days the familiar survey boat Diana shown below... 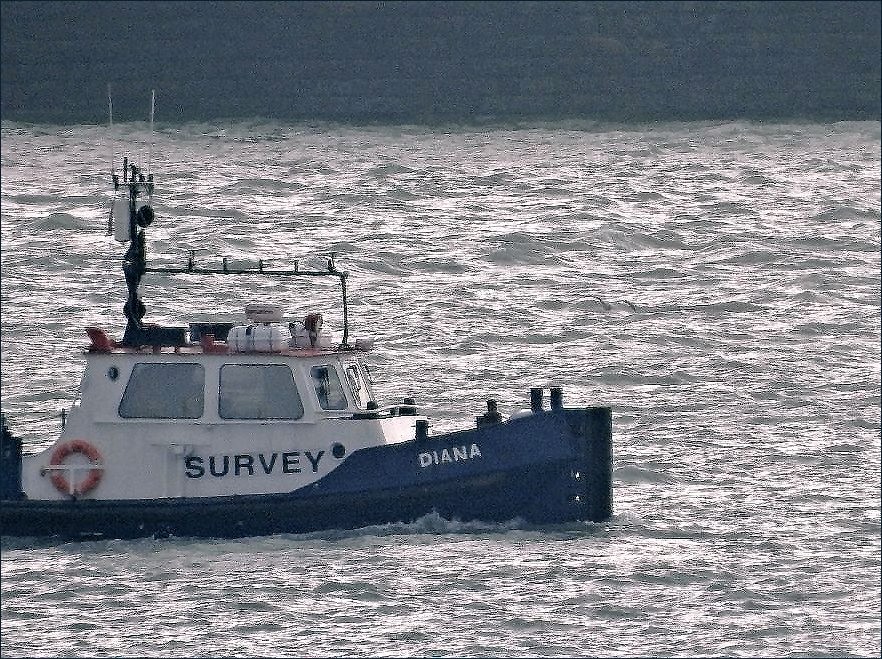 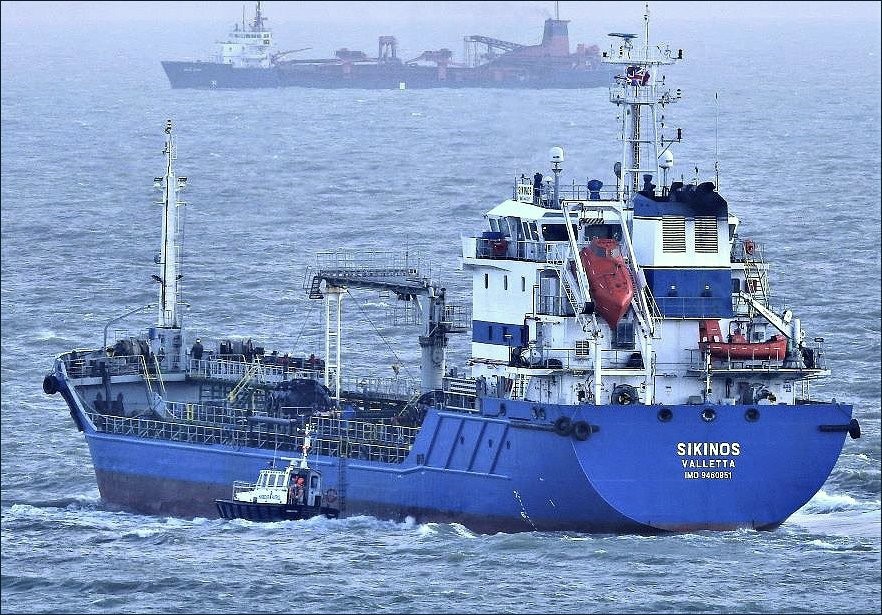 Sikinos; The missing Sikinos photo from the earlier post (7114) now re-done...hopefully... You can see her there exiting the Port of Dover at approx 16.40 Monday in misty murky conditions (Feb 7) as she heads for Zeebrugge in Belgium. Pic not the best quality but we're blaming the conditions...(!) 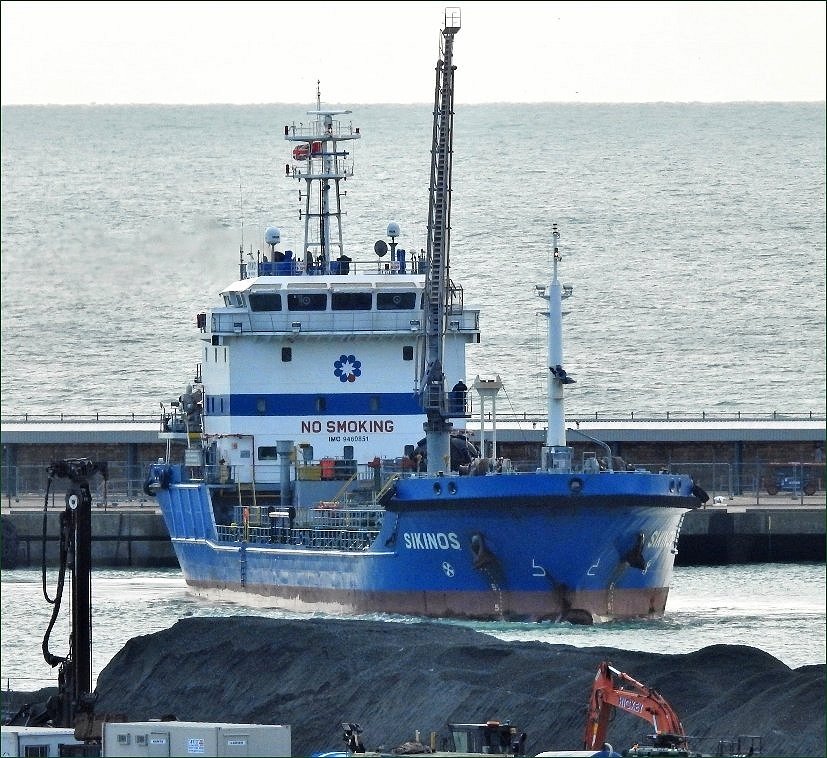 An extra one of Sikinos above there from a former time to make up for the loss of the shot below... 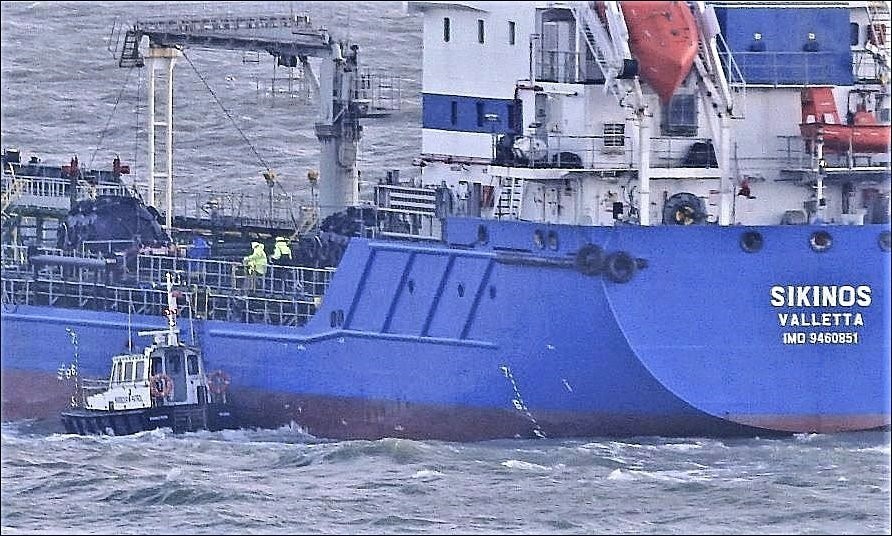 Pictures above there of oil products tanker Sikinos leaving the Port here in Dover late-in-the-day monday (Feb 7). Time around 4.40 as light faded and gloom gathered. The second zoomed-in picture there added, as a tad later spotted the pilot about to depart Sikinos...Sikinos is a fairly regular visitor here nowadays supplying bunkering services.
Update: apologies.. one of the pictures deleted as it reproduced poorer than expected. Will see if fixable. 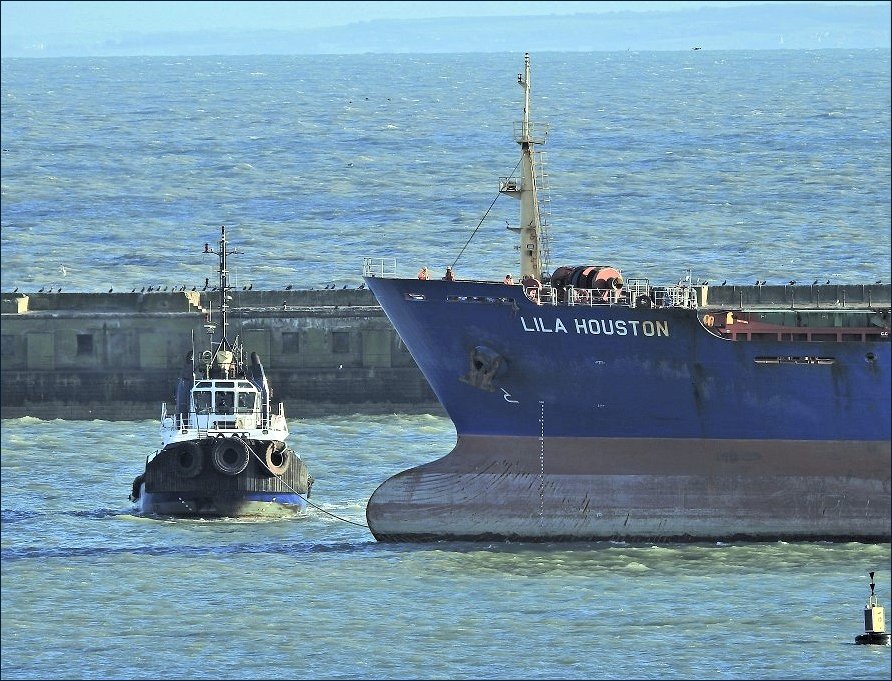 It suddenly got a bit brighter as Lila Houston made her way across the harbour as you can see above there, so bright even the rolling hills of France came shadily into view in the far background.

The picture below taken the following day. Its a bit of a yawn-inducing pic but it shows the length of the Lila (180 metres long) stretched out at the far Eastern Arm of Port. Was able to get the shot after all the ferries temporarily vacated...somewhat unusual to have all ferry berths empty so took advantage. We understand its the largest cargo ship ever to visit the Port. 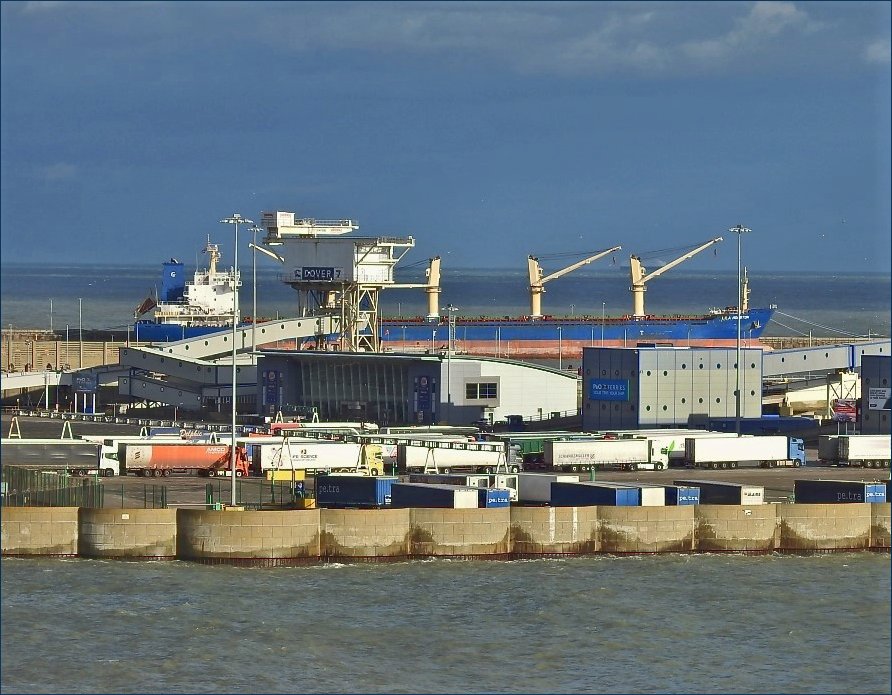 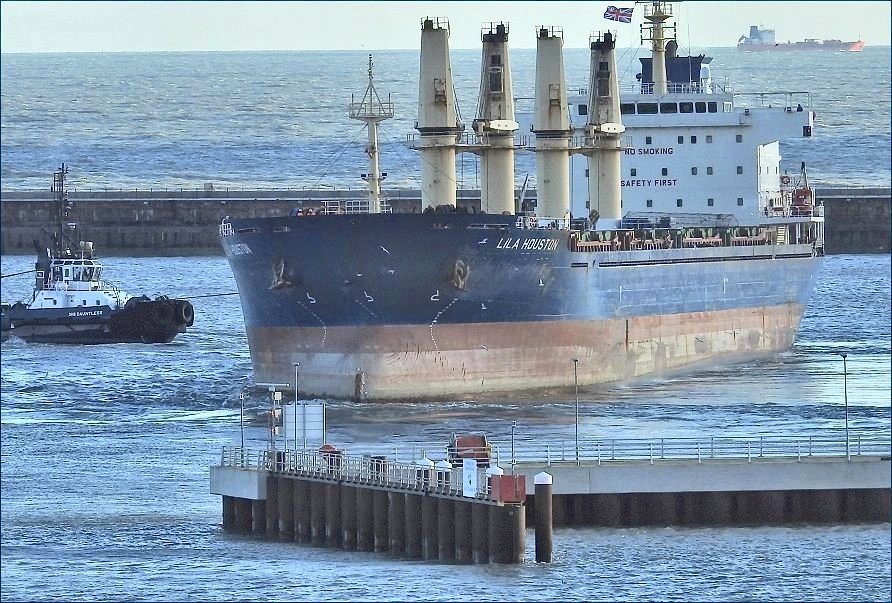 Sunday, 6 February 2022 - 16:58
Post 7111
Sea News, Dover
After a long stint LILA HOUSTON is captured here moving away from the new cargo terminal WD4 a couple of days ago ( just checking .... Friday ) with tugs Doughty and Dauntless lending the ever dependable assist.... 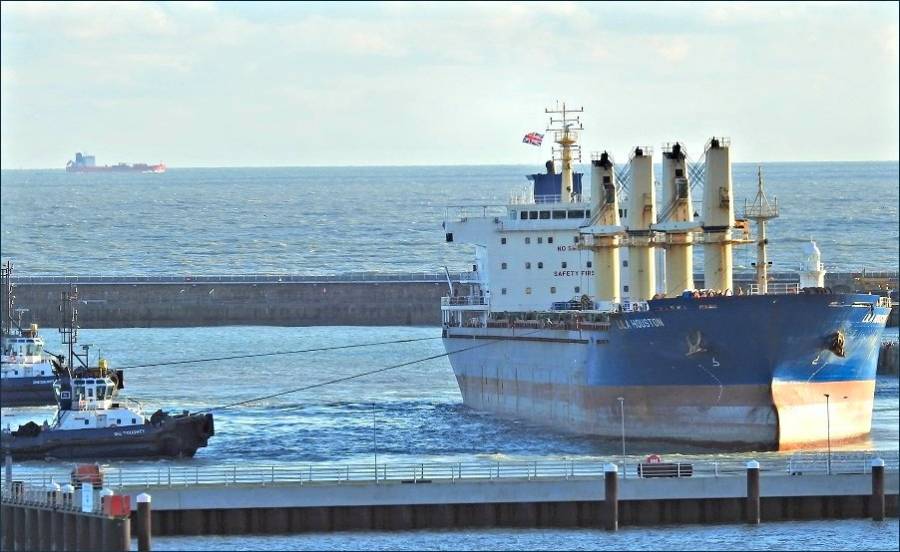 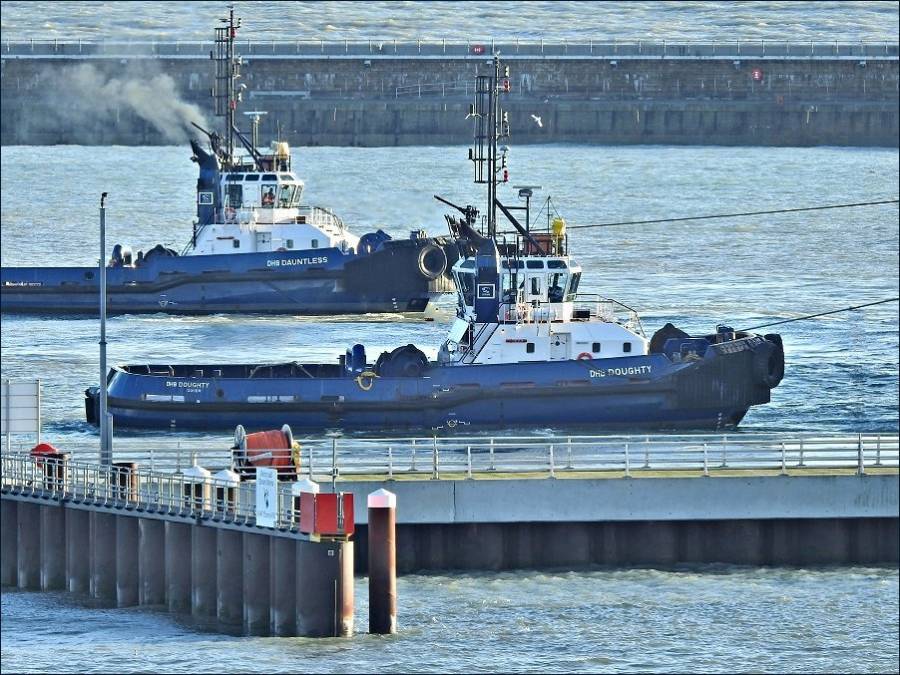 Lila Houston moved over to the Eastern Arm of the Port and is still there as we speak.... 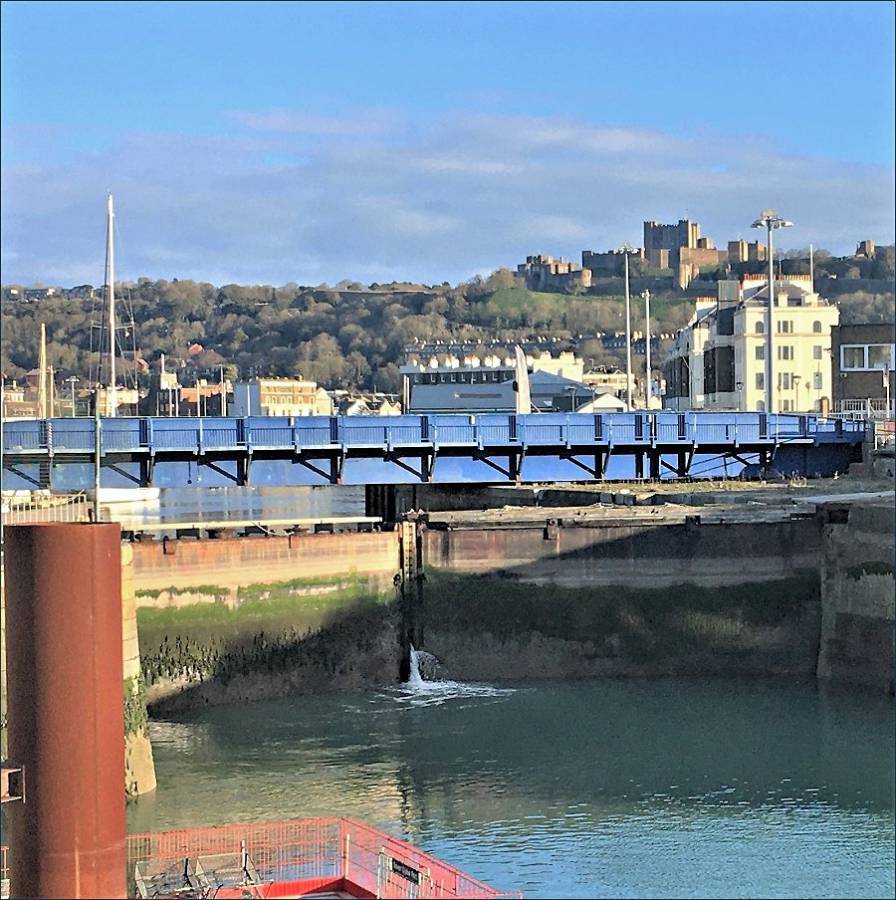 Well there we are again, the same newly re-opened bridge but from a different and wider angle...showing the striking Dover Castle in the far distance .... pic taken a few minutes after the one below on a fine colourful February morn...
See post below for Port message. 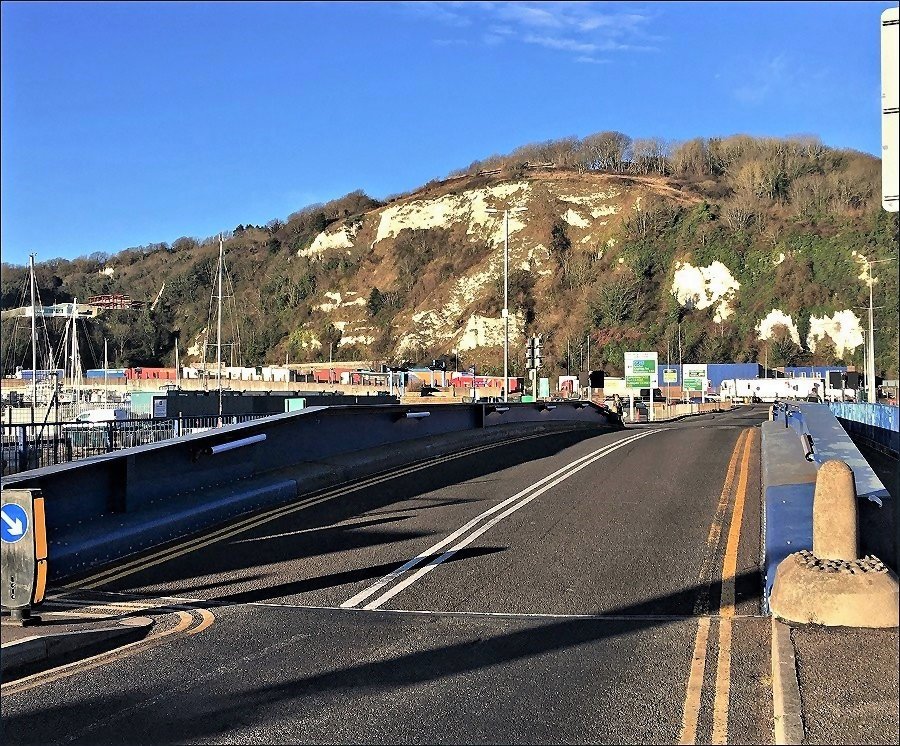 Message from the Port :

As the works were originally delayed due to the availability of road surfacing contractors, we are pleased to announce that the Bridge has now re-opened (28th January) in advance of the revised date of the 4th February.

HGV traffic is now encouraged to utilise the Union Street route again, rather than the promenade.

We apologise for any inconvenience caused during the closure and thank the community for their patience during these works.

Very little traffic on it Wednesday mid-morning (Feb 2 ) when the pic was taken, as you can see.
People may not have twigged that its open yet.
It helps greatly with easier access to the seafront,
Very good to see it open once again. 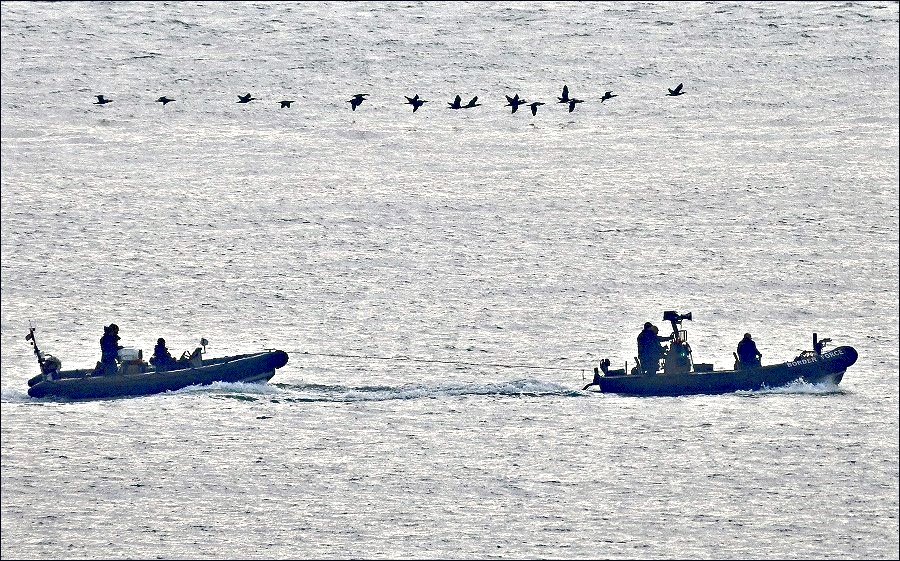 Following along from the picture below re the Cormorants, here we have them again, this time skimming the surface of the water in harmonious tandem with the ever busy Border Force guys. One rib appears to be towing the other there.... didn't notice that initially... 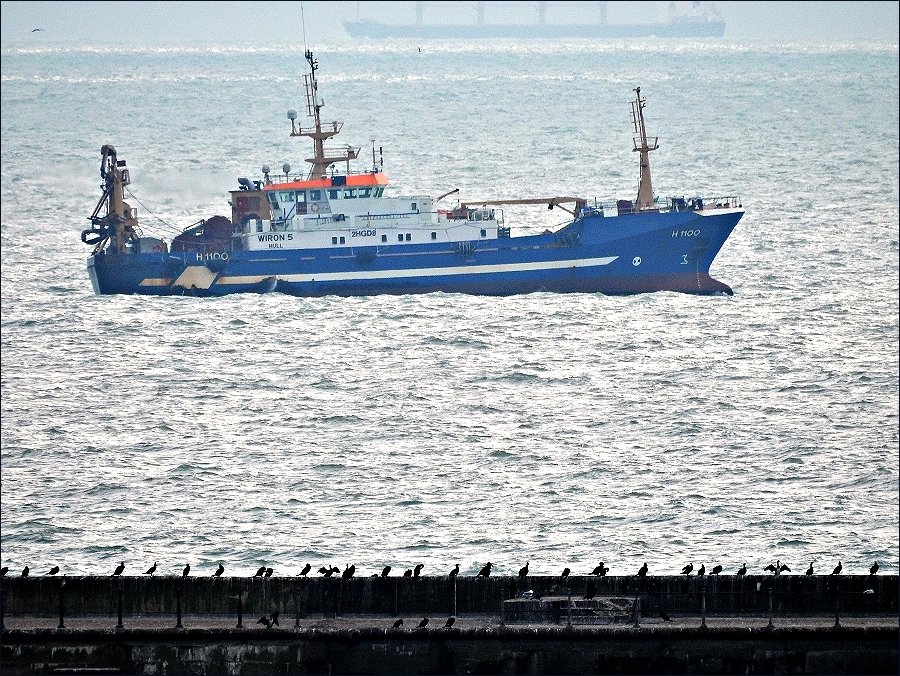 Above we have deep sea trawler H1100 Wiron 5 passing close to Port here a few days ago. It was a bit misty...there were altogether two near identical trawlers, but alas the first one had dipped out of view by the time the camera kicked into play. Watched above there by literally hundreds of cormorants on the breakwater at the time, just some on show there... 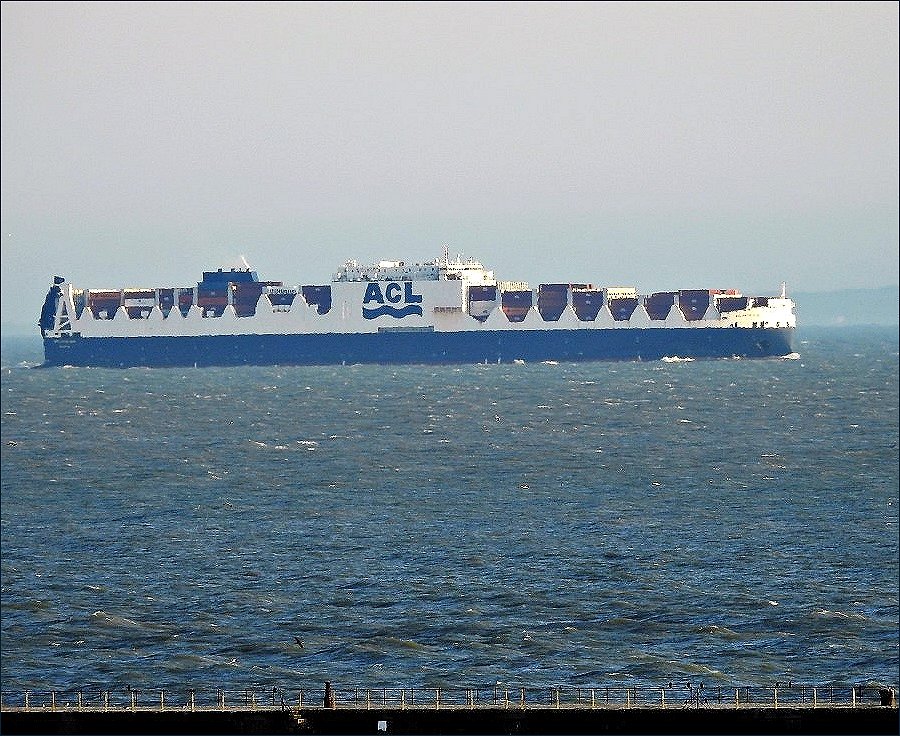 Yesterday (February One) the Atlantic Sun came in relatively close and is unusual so definitely worth a shot...she is a ro-ro container vessel..on way to Liverpool from Hamburg.