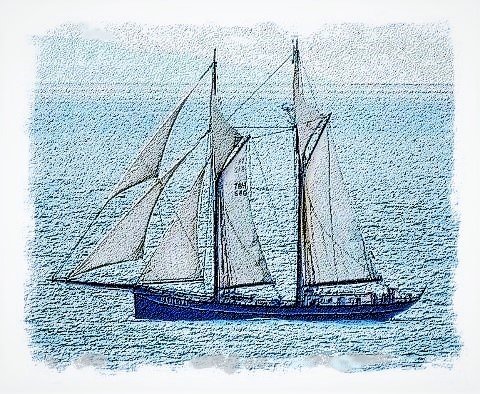 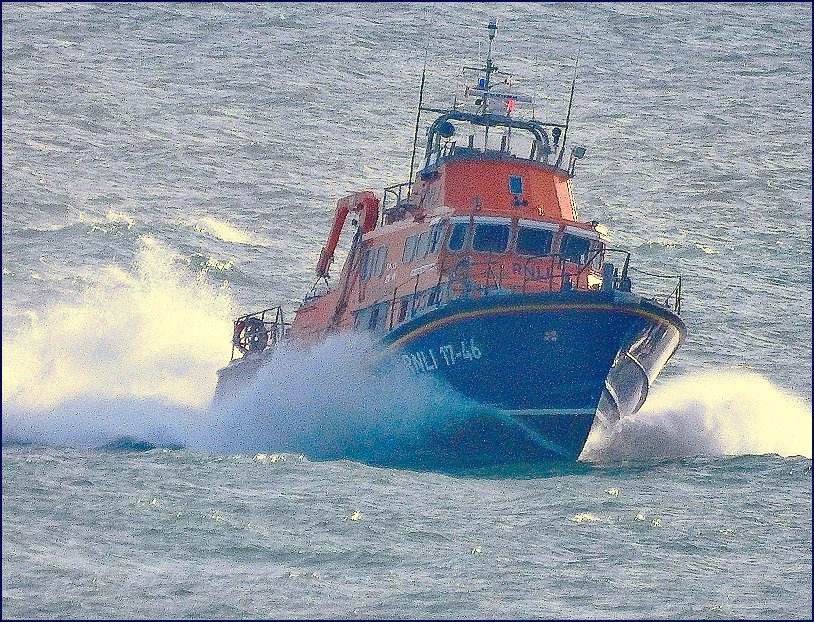 Another shot of the Lifeboat in fast action there to bring in the New Year .....

We take this opportunity to wish everyone a Happy New Year. Its sure to be better than the one just gone...isnt it?

NOTICE: Just to say that we wont be continuing to make posts on Sea News. We have had a great and enjoyable run. I want to say thanks to all those who contributed over the years and those who helped behind the scenes, some sadly no longer with us. A special thanks goes to Chris Tutthill who did super technical work for us and always kept us running really well.
Paul Boland 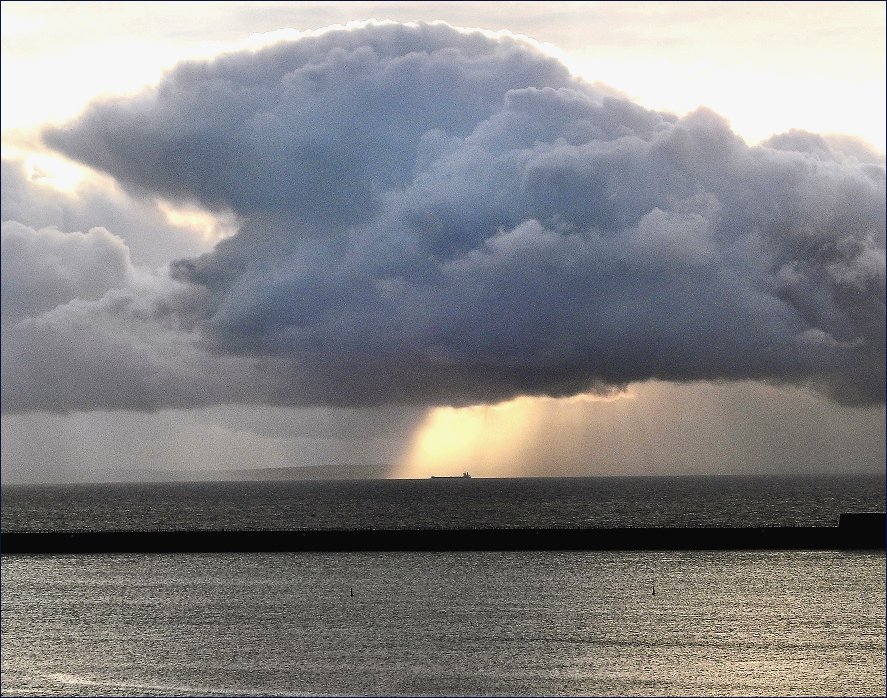 Weather in the Channel

We have been plagued by bad blustery weather over the past few days, conditions have been very rough for the ferries and indeed for everything and everyone else...and so it goes on this morning. To say that our 'observation tower' here is currently windswept would be a serious understatement. The pic above was taken three days ago on the morning of the 27th (December) while it was still reasonable but you can see the situation building in the Channel...look at that cloud! 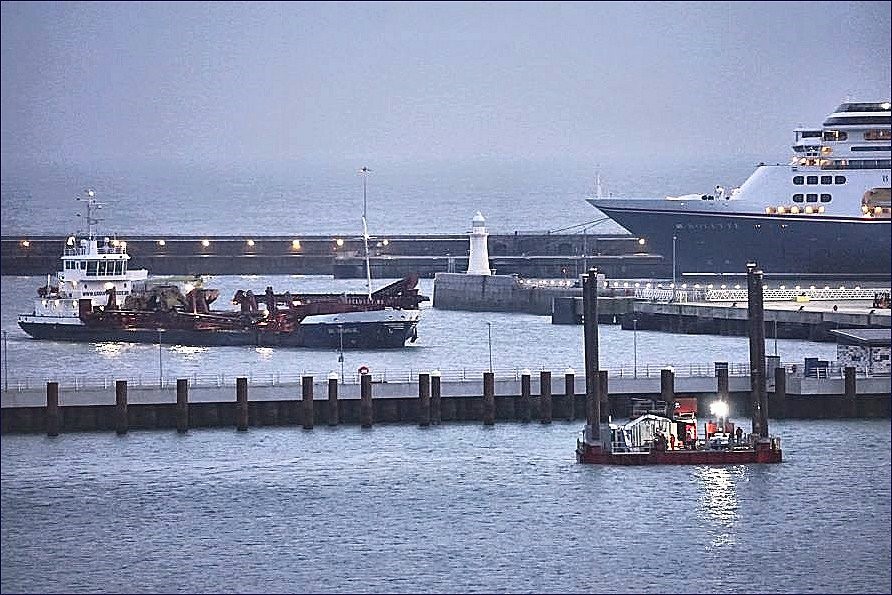 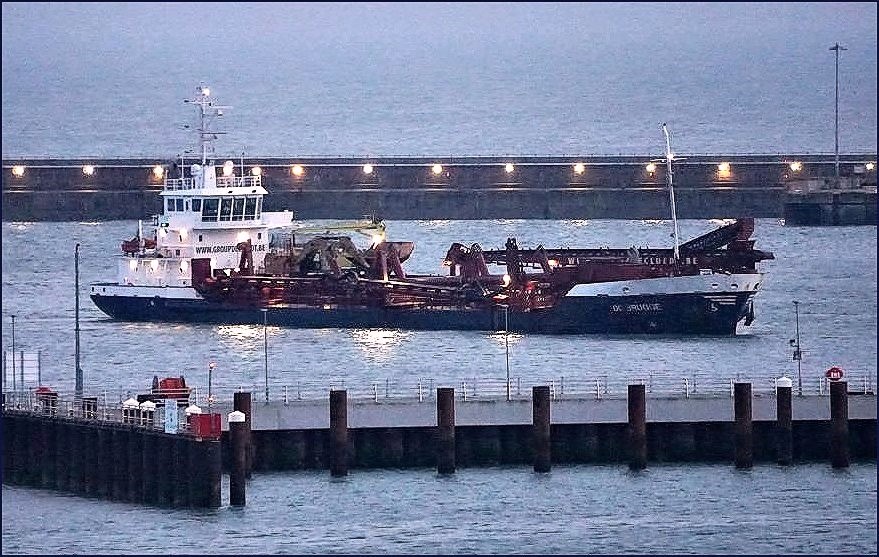 Following along from the picture in the post below...we now have a wider shot of the same scene at the top there and taken at the same time. Immediately above we have a closer picture of the fairly regular visitor nowadays the dredger DC Brugge....seen there making her way to the second cargo terminal WD4. All in gloomy conditions of course as you can see. 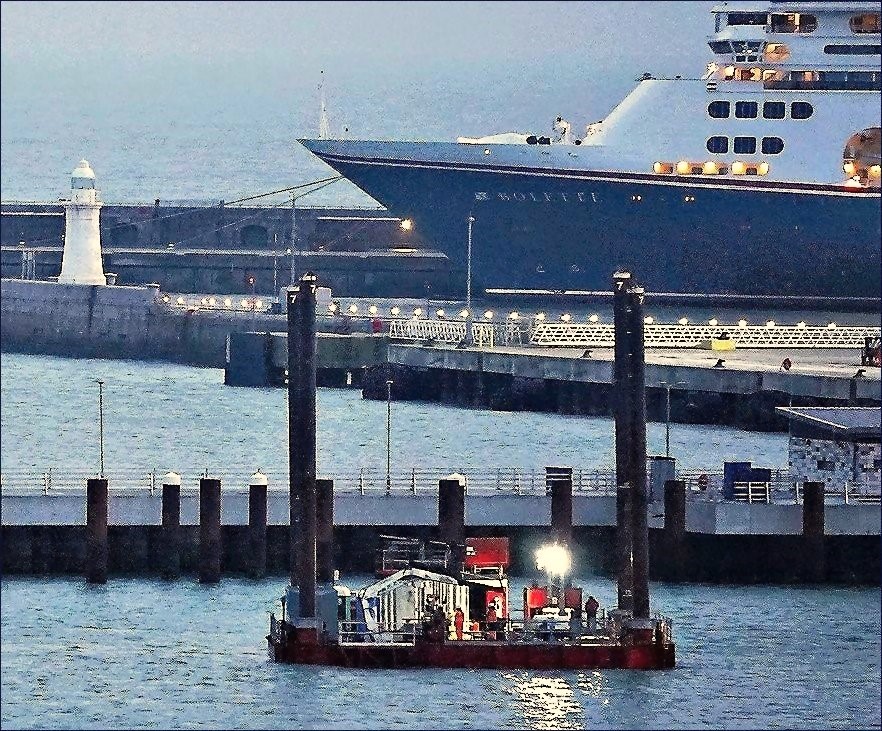 Working Platform:
Boosted late-in-the-day picture taken through the descending gloom recently...you can see the busy working platform above there which is located in shot close to the entrance of the new but empty Marina. In the background we have Bolette, this recent pic was taken just before her latest run out.

Merry Christmas to All 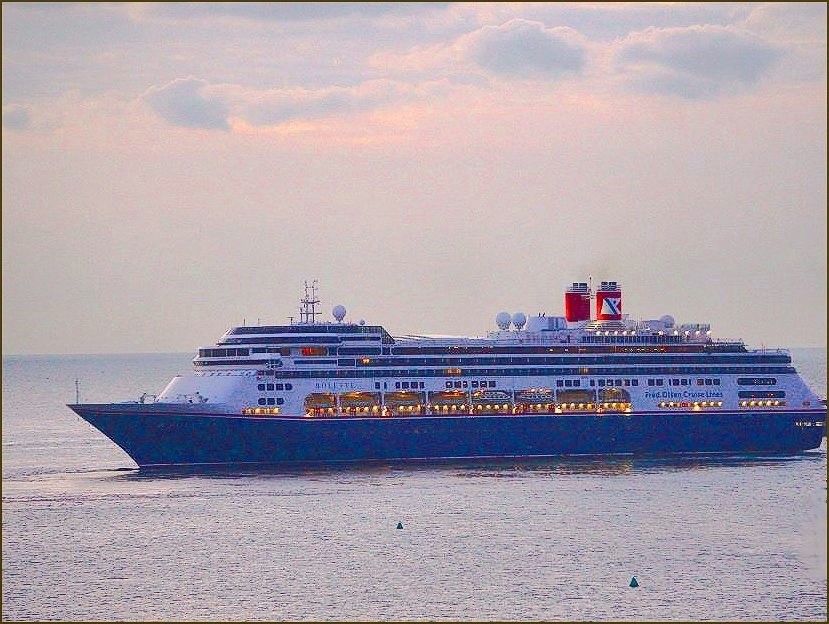 Bolette recently left the Port here in Dover yet again. Now, we dont know if the cruise ship has left us for good or is just on another one of her 'runs'. When we looked earlier today she was well up the coast of eastern England beyond Norwich. The picture shown above was taken a few days ago...early morning. It was taken a short time after the one a few posts below with the helicopter. The day had brightened a tad for this shot and ahem!... we helped it a notch too. 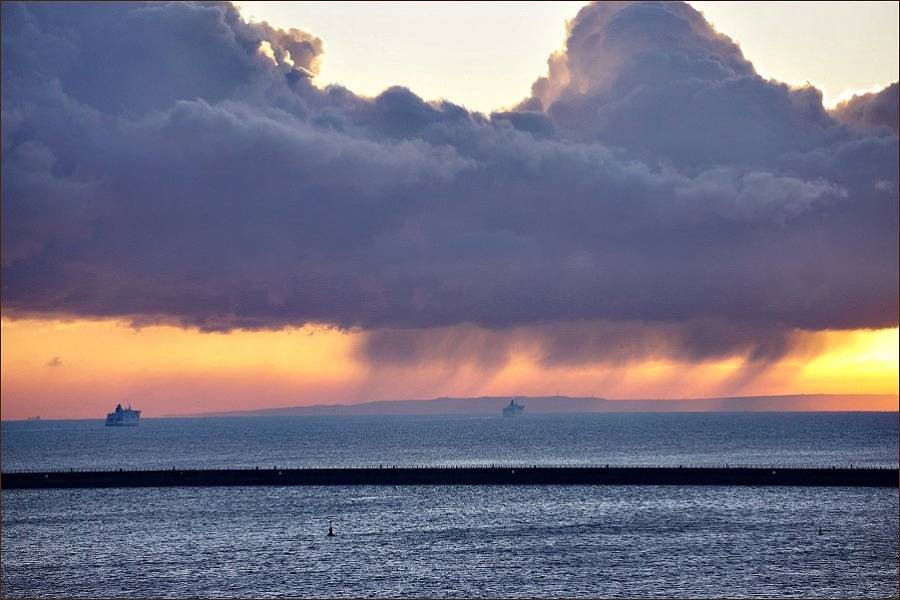 Well, its early in the morning. The sun has risen and the sky has a delightful orange glow. But right in the middle of this 'idyllic' scene a humongous black cloud hovers...and while it hovers it deposits thick snow on the rolling hills just south of Calais....and below its enormity, the ever busy ferries carry on. Picture taken just a few days ago (December 16) on a very frosty chilly morning. 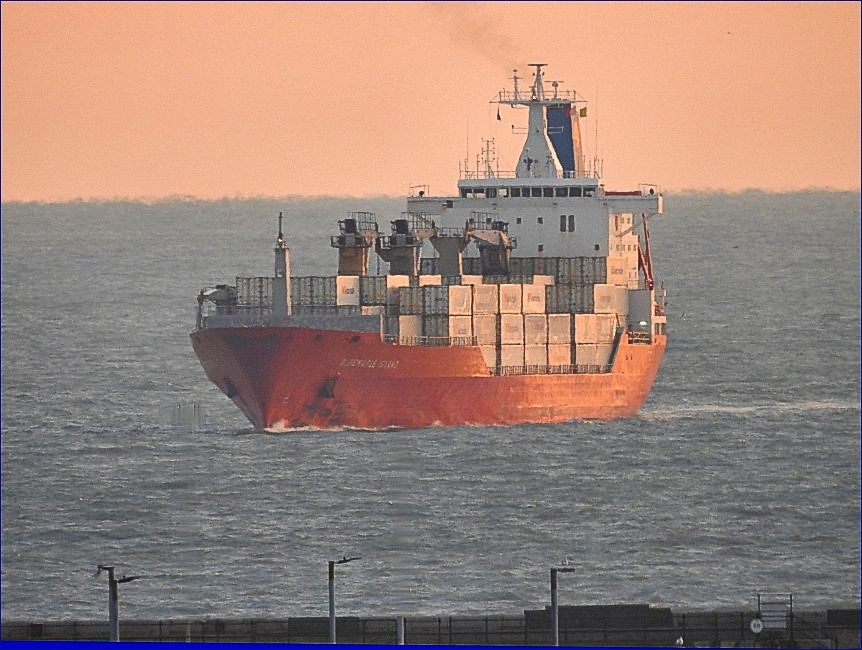 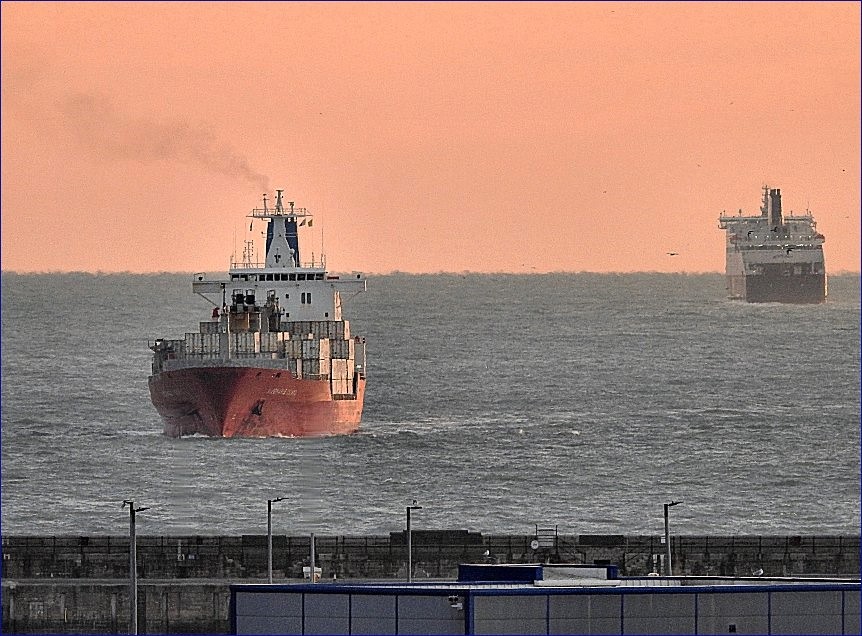 Just getting back to normal routine now after the upset of the recent crises and there we are above with two early morning shots of an approaching reefer...name of reefer this time.. Albemarle Island. Pictures from one week ago and we see the ship arriving under an early reddening sky on a crisp morning. In the background of shot 2 you can see one of the DFDS ferries making its way to Dunkerque. 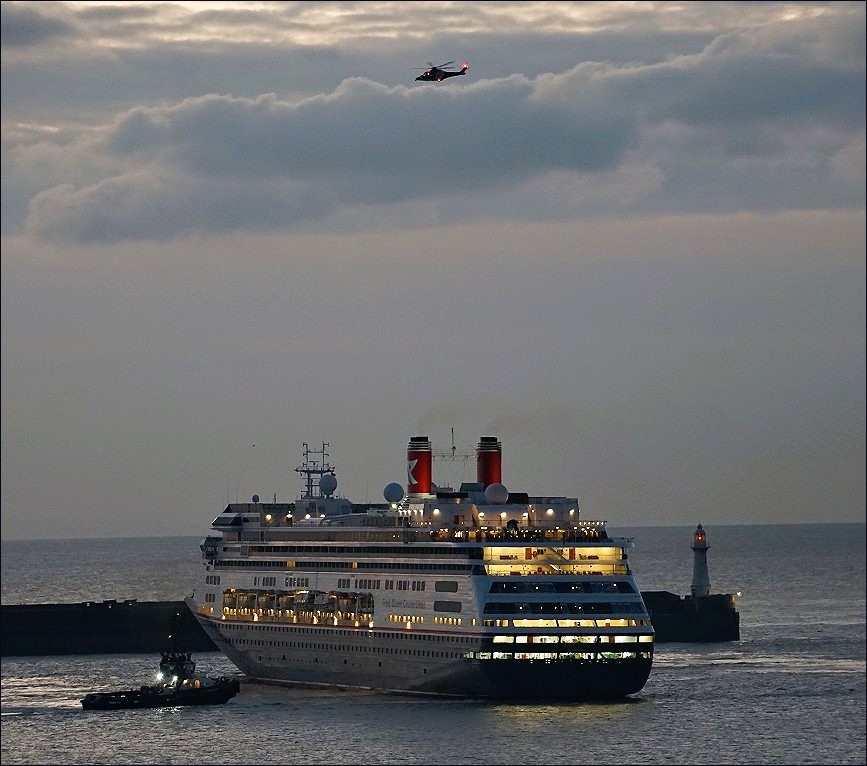 This is cruise ship Bolette arriving just after 7 am on Wednesday morning. The ship had been on a channel run ...she is currently a semi-permanent resident here at the Port of Dover and an occasional run is de rigueur.
But of course, she is seen here arriving in the midst of the sadly unfortunate emergency services search for lost migrants just out there in the crossing between here and France. At the top of shot you can see one of the searching helicopters. It was quite dark at the time so we're not entirely sure but it looks like the regular HM Coastguard helicopter. A number of helicopters landed here at the Port. As we know the search ended with 4 dead and it looks like a further 4 remain missing. The search has been called off.
More below..... 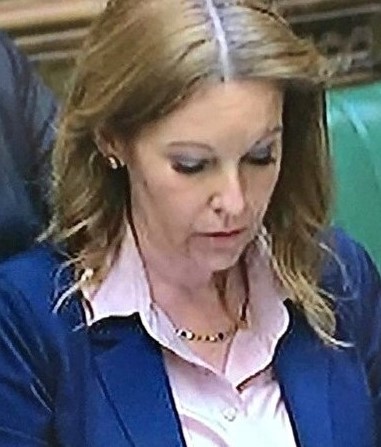 My heartfelt thanks to our local Deal and Dover RNLI, Coastguard and Border Force workers and volunteers for their professionalism and dedication in responding to the tragic incident in the Channel yesterday (Wednesday).

Their actions, alongside the quick acting French fishermen, resulted in saving a large number of lives, including a number of young people.

Sadly a number of people have been confirmed dead or missing. It is a stark reminder of the dangers of crossing the Channel in an unseaworthy, overcrowded inflatable dingy in the wintry seas.


Later that same day below...Wednesday...and we see Border Force Typhoon ferrying in more migrants just a few hours after the earlier tragedy, and so it sadly carries on .... 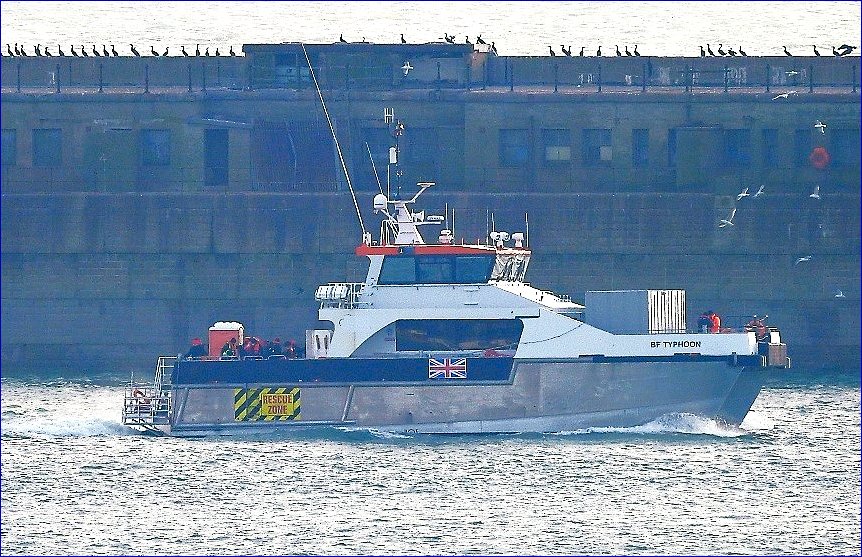 Border Force Typhoon arriving with yet more rescued migrants.
We can certainly echo Natalie Elphicke's words...the Border Force, The Coastguard, and all the RNLI teams are doing a superb job...

Post 7375
Sea News, Dover
The BBC are reporting that a search will continue today Thursday but mostly by drone as its unlikely anybody else will be found alive. Although everyday, as we know, there are many vessels out there from Border Force, Royal Navy, and of course the various Lifeboats ... all will be intently watching out of course.

BBC: On Wednesday, Prime Minister Rishi Sunak expressed his sorrow at the "tragic loss of human life". The Archbishop of Canterbury Justin Welby said debates about asylum seekers were not about statistics but about 'precious human lives'.

Post 7374
Sea News, Dover
Sadly four people died early this morning in the Channel. A migrant boat capsized in the darkness and many were tossed into the water in the freezing conditions of those early hours. We understand a fishing boat rescued many from the water, and a huge operation was launched particularly between 4am and 7am when we saw much activity here in Dover on the Port's western arm...between those hours at least two helicopters landed...and on the ground we saw the many flashing lights of emergency vehicles. The rescue operation carried on....

Dover Lifeboat racing back to Port this morning Wednesday Dec 14..... 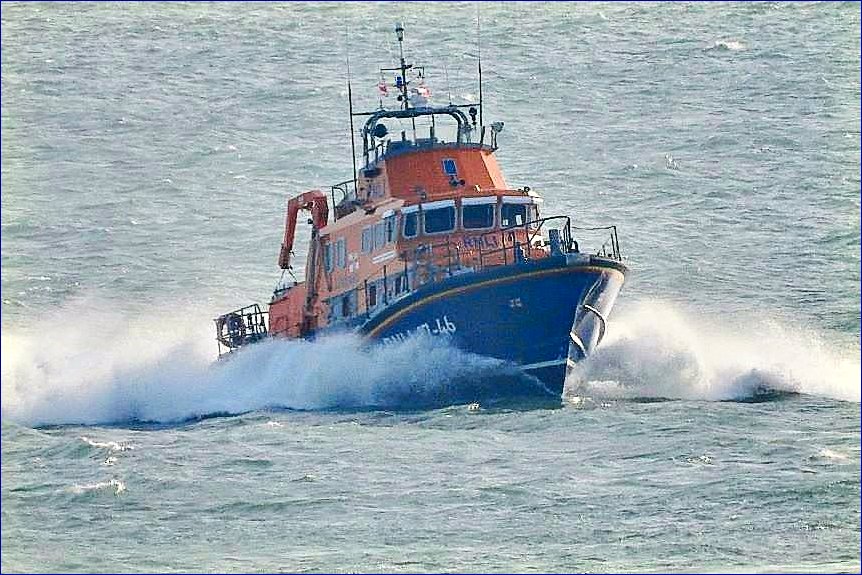 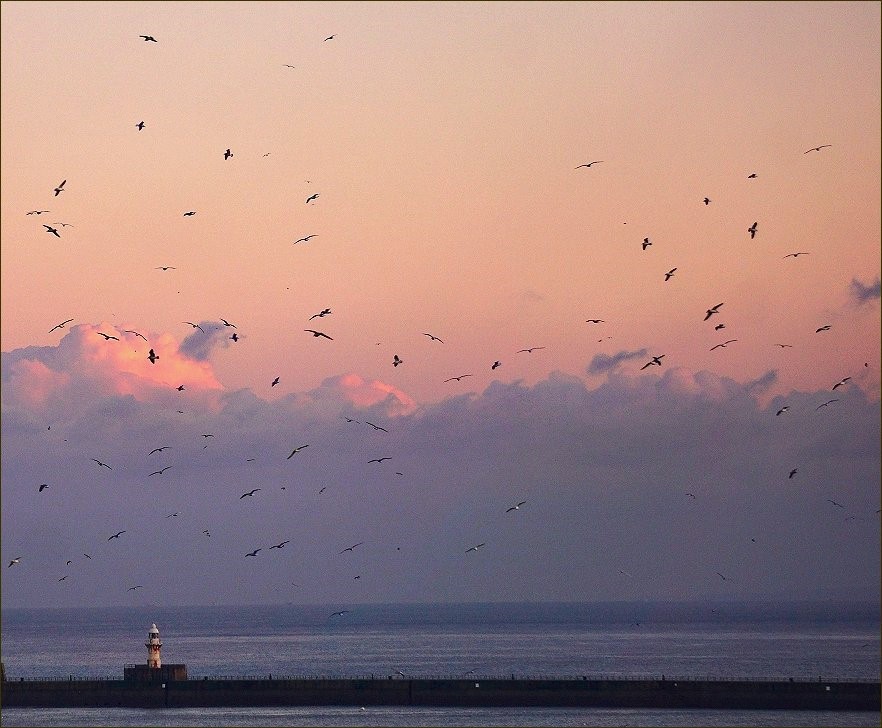 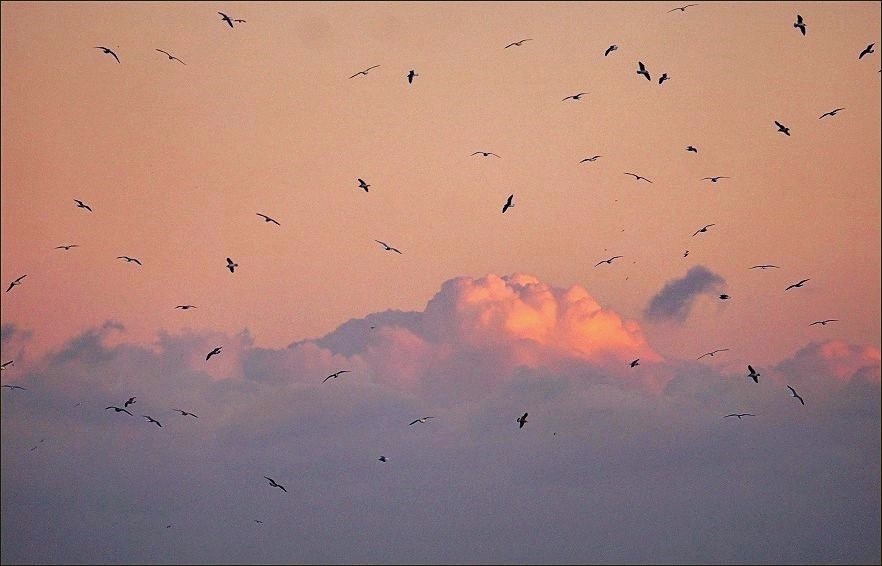 A huge amount of birds took to the wing a few evenings ago...for no apparent reason....just as the day faded away. Usually it takes a loud bang of some sort to bring about this kind of airborne reaction, but no, not this time. An end of the day flurry as the sun sank away, just before the cool chilly night fell on the Port.

Just came across this one below in the files...more birds from a former time. 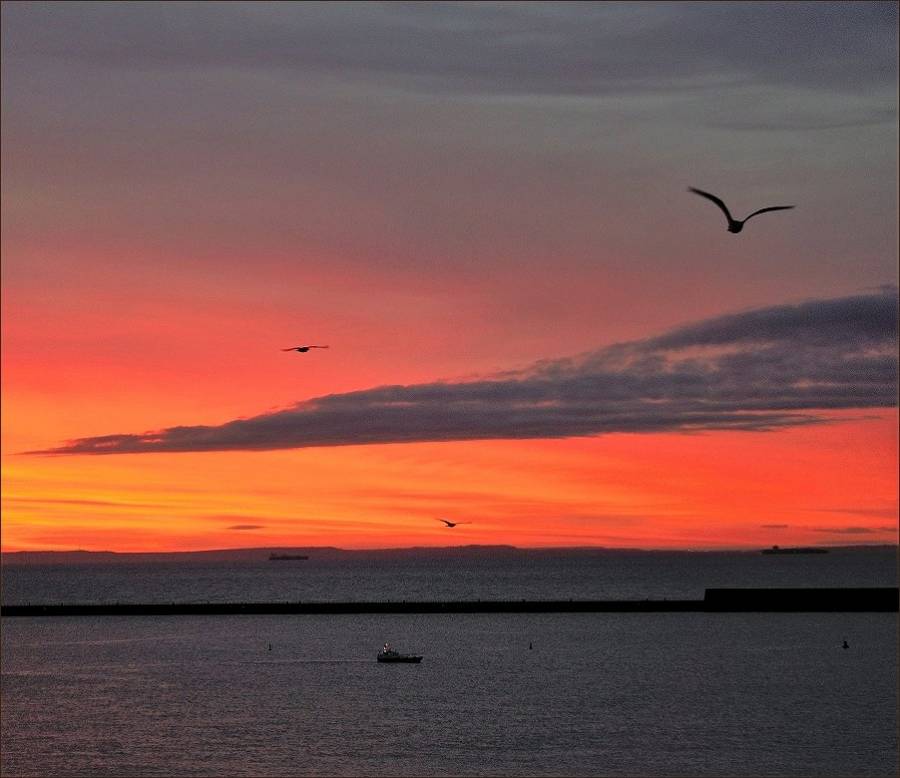 Birds on the wing at Dover. 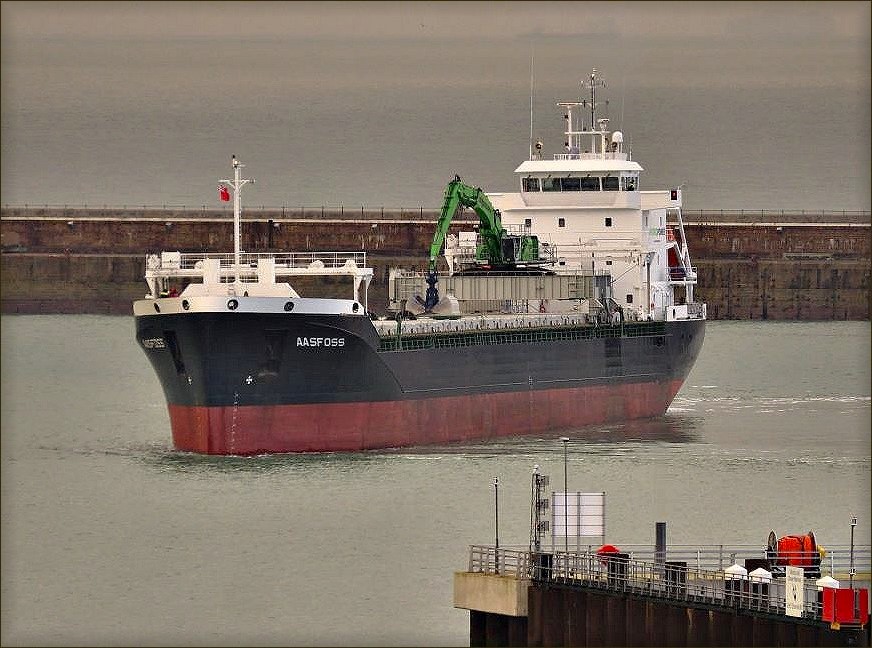 Norwegian general cargo ship Aasfoss ( you have to be careful how you spell that one!) moving away from Dover on Friday afternoon. She had been at the cargo terminal WD4 for a couple of days and we just caught her as she began to move away from the pier, her job in Port successfully done. Looks like it was a steel delivery. In the background of pic 2 you can just see a motor boat/cruiser powering off into the gloom. 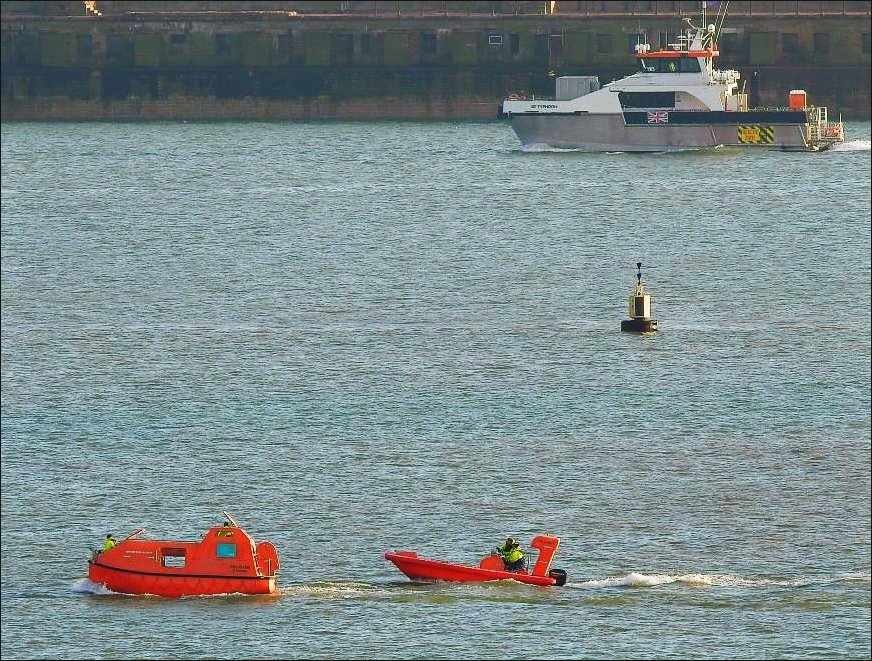 In the pic above we have The Maritime Skills Academy training in the harbour a couple of days ago. While in the background you can see the ever busy and even harassed Border Force team heading out for yet another difficult day...as despite the freezing weather the incursions still go on. We have sympathy for the migrants too, media reports today speak of many being picked up in a freezing condition.... The Border Force vessel is BF Typhoon.

An extra pic below of the excellent Maritime Skills Academy from a previous time... 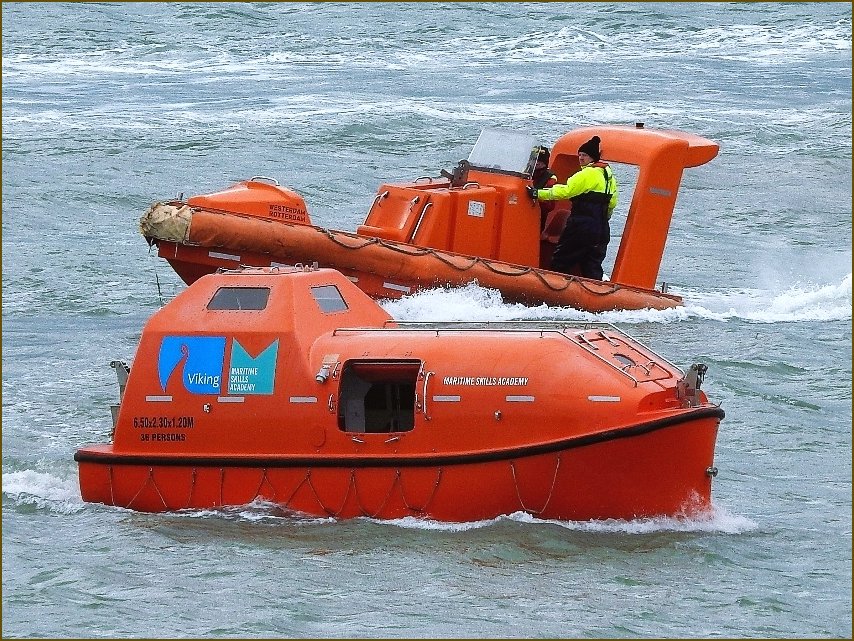 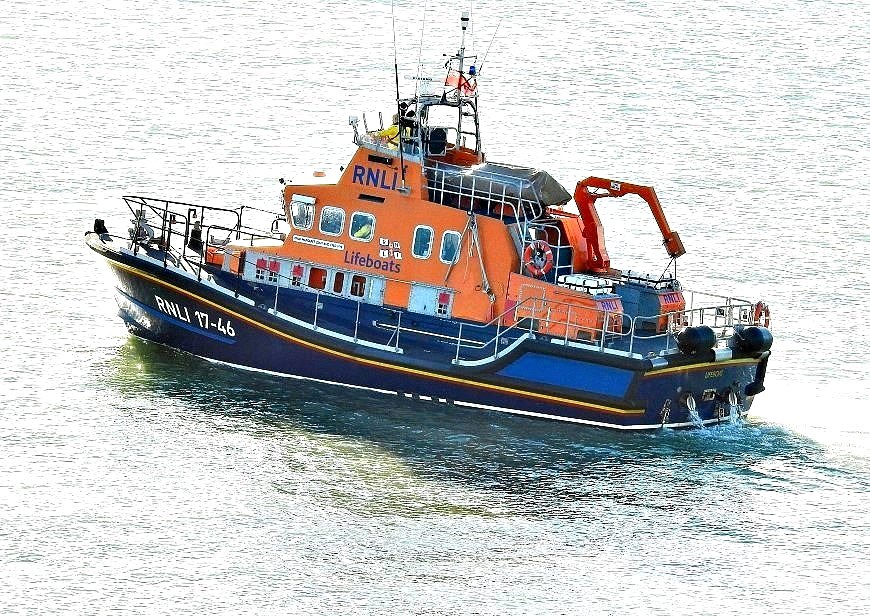 Lifeboat : We managed to recover one of the early sun-blitzed pictures of the Lifeboat carrying out manoeuvres in the harbour on Tuesday morning. Two days ago on Wednesday we made and used a poster (see post 7368) as we couldnt use the pictures in proper/normal mode but here we are now...we have one at least at last. 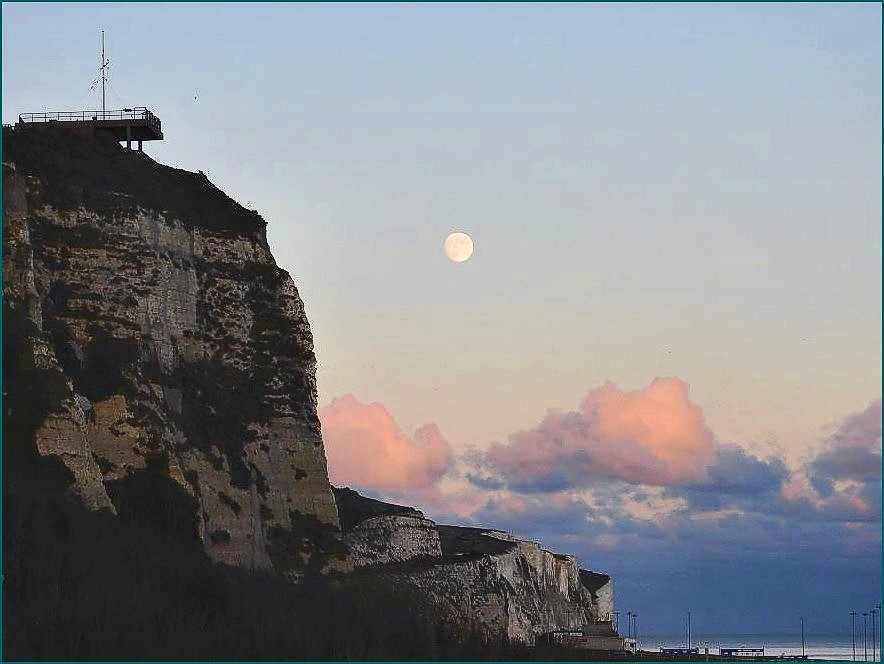 This is the December Moon early Tuesday night as the great orb hovers over the White Cliffs of Dover just behind the Port, although the cliffs are not looking particularly white in the pic with night falling. Its probably not quite the full moon but still, as always, looks spectacular.
Just as we were about to hang up the ol' Nikon for the evening, a squad of birds flew across the scene so we gave it one final burst and there we are below... genuine pic.
Moon with bird flying high.... 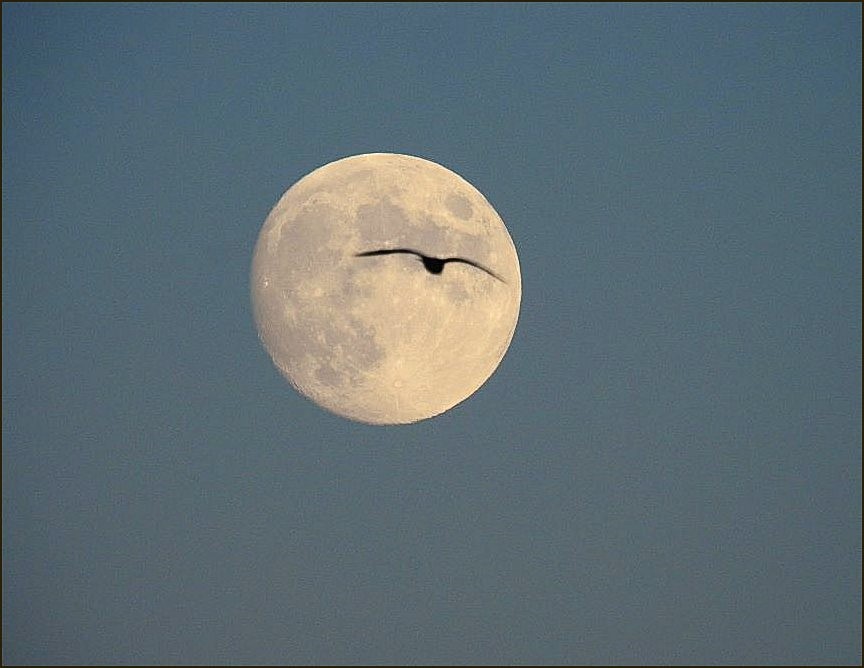 Post 7368
Sea News, Dover
The Search And Rescue Lifeboat was magnificently circulating in the harbour yesterday morning Tuesday, but because of blinding sunlight on the water we were unable to get a stable photograph that worked...so...we made a poster.. and here we are... 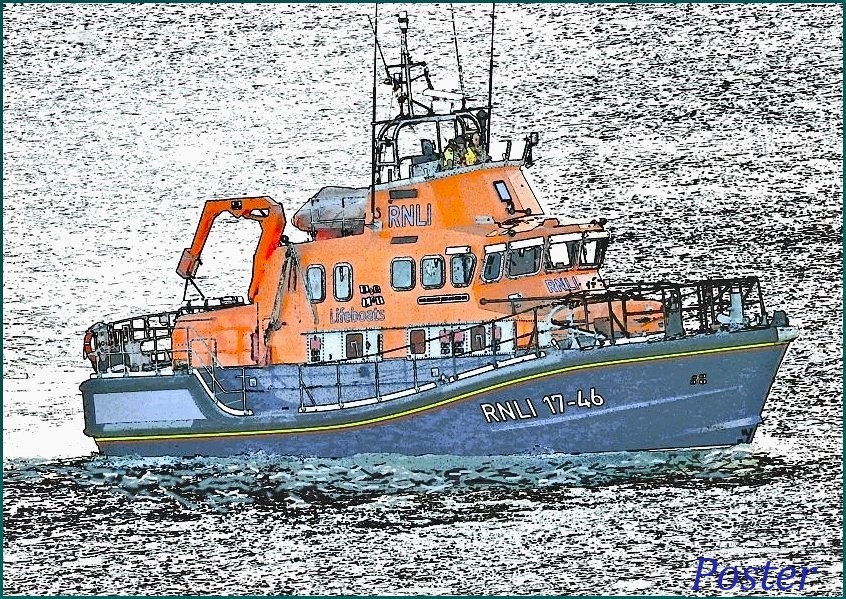 The Lifeboat here in Dover. 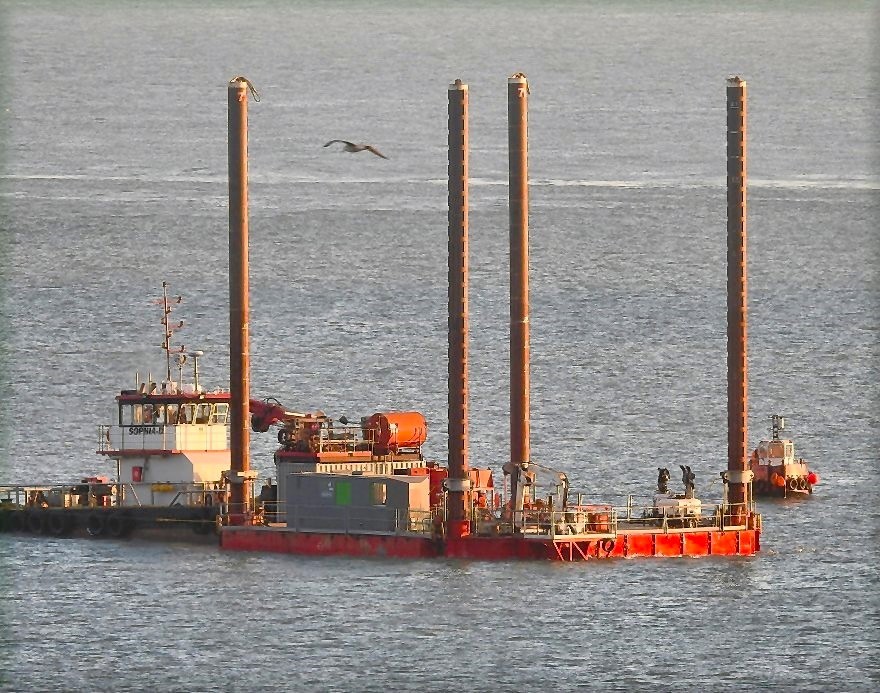 Some pictures now of the work platform in the watery late-in-the-day sunshine as she makes her way back to the New Marina with the powering help of workboat Sophia D. Pictures taken late last week. The platform is working over at the eastern docks, at the old cargo terminal we understand, and here we see her coming back over to the western side of the port at the end of the day. Also featured is other workboat TM Alfie which appears to be delivering more crew... 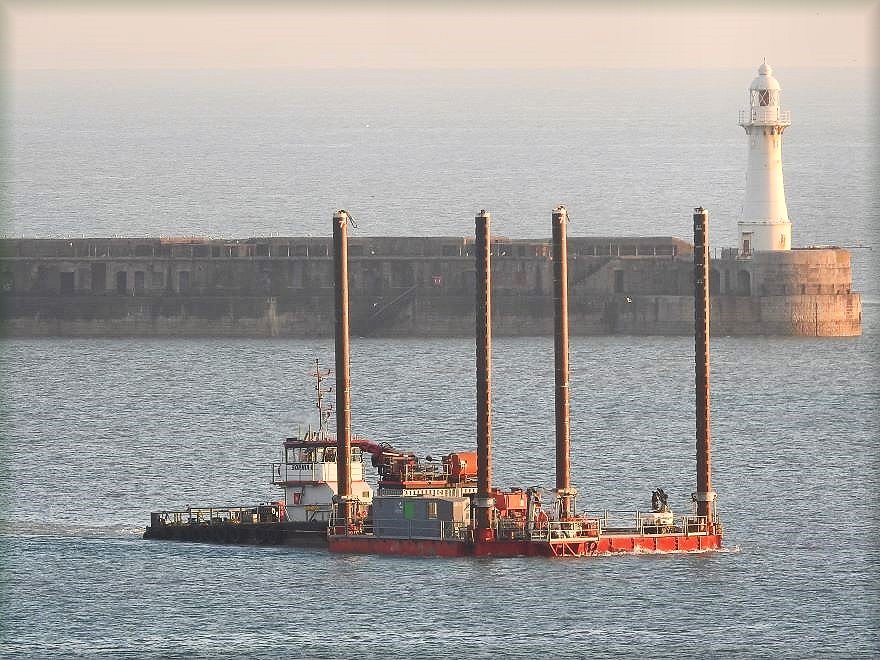 Another pic of the working platform above and with workboat TM Alfie below.... 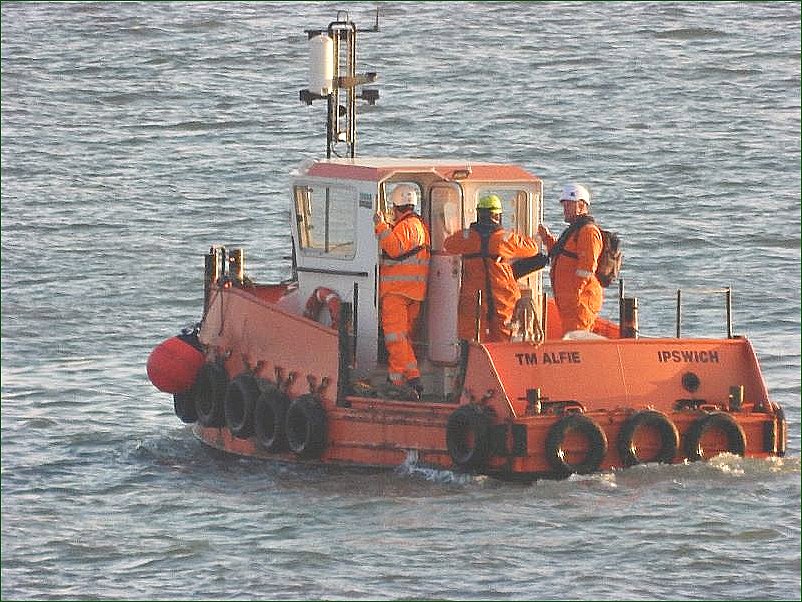 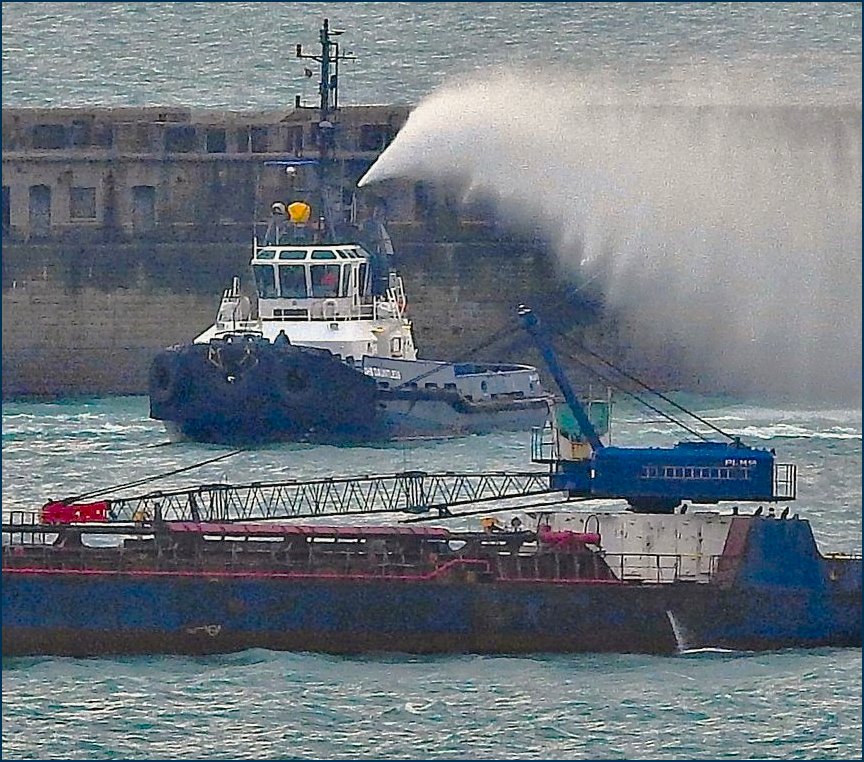 Tug Dauntless spraying....
Just a cropped version of the pic below for added impact !! 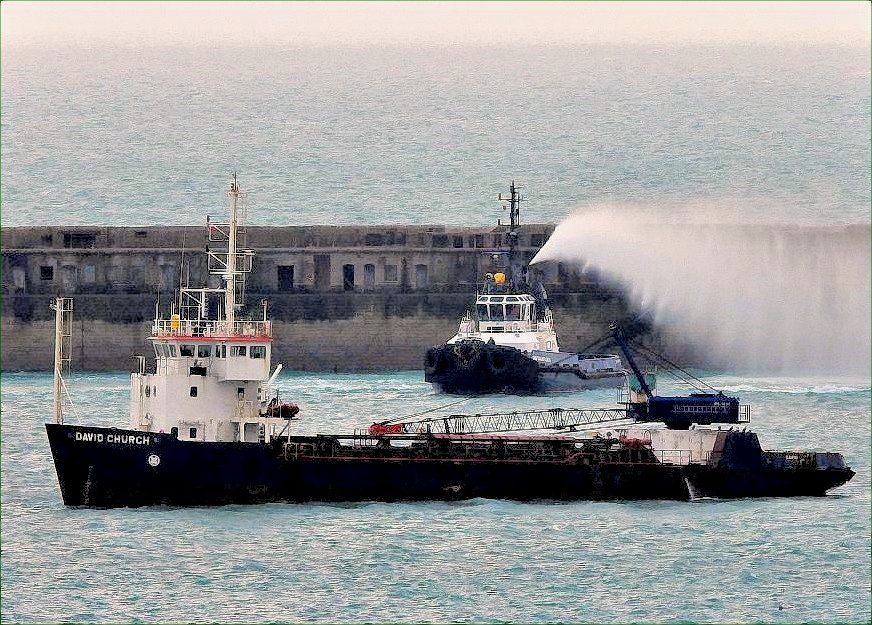 Just caught the tail end of the tug spraying yesterday Friday, got a couple of shots in then the tug stopped the activity and merrily wandered off. So not entirely sure what the spraying was for...little was happening, unless it was doing a special greeting for long time Port dredger David Church in the foreground there..... seems unlikely but... just saw it for a minute so just one plain picture to show. Time of pic 10.19 on murky mornin'