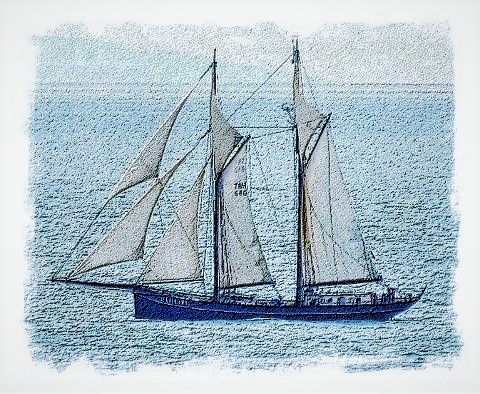 WWW.DOVERFORUM.COM/SEA-NEWS
Sea Pictures from DOVER ....333 plus pages to trawl through now..use Search Engine just below.
All pictures copyright of owners. Editor : Paul Boland - dover7@msn.com
Comments Page:   1   2   3   4   5   6   7   8   ...   332   333   334
Comments (Newest First):
Post 7149
Sea News, Dover
As you would expect the P&O job nightmare got much media attention. The pic below, not the clearest, but it shows well known travel writer Simon Calder reporting this morning Thursday. One presumes it's for the BBC as we have seen him regularly on there.... there were numerous other tv crews covering the story.... 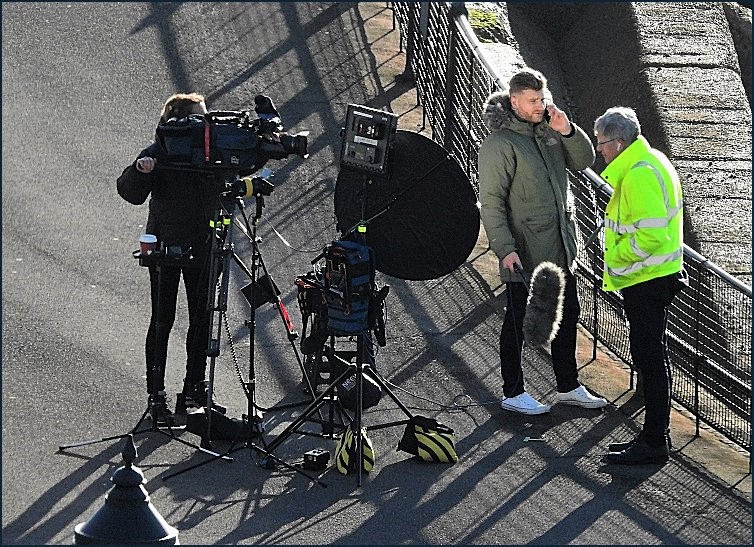 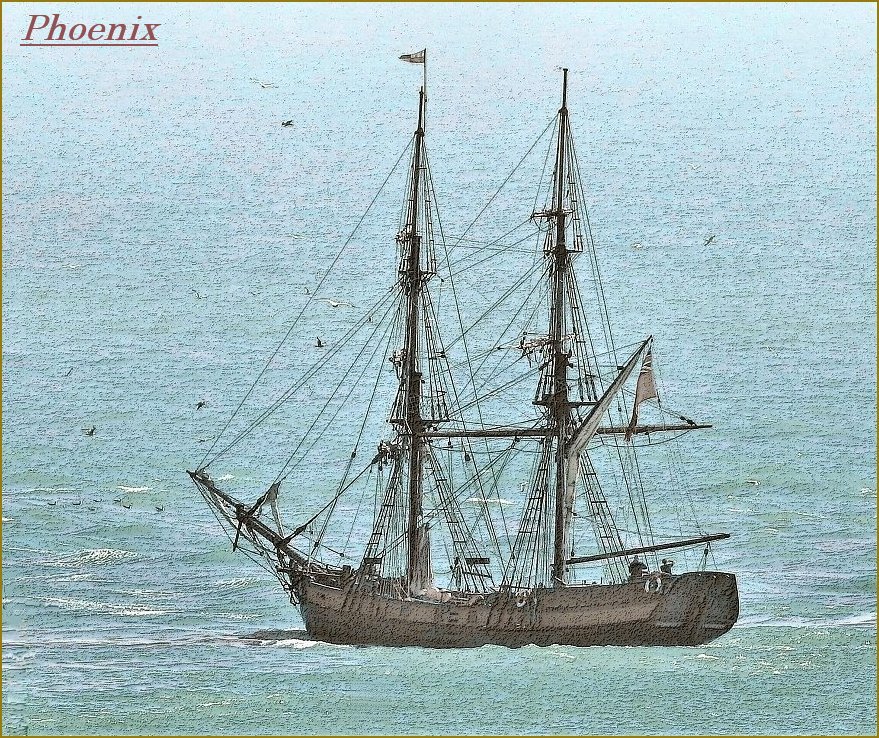 Sailing ship Phoenix exiting the Port of Dover on.....March 14 at 10.47am ...
We only saw the delightful Phoenix at the very last minute, just as she exited the Port through the eastern exit. She was then obscured from our view almost straight away by a just entered ferry. We got just ONE picture, and that's it above...happy to be able to say we got a picture though...Lots more info about Phoenix on Google including details of her film career.. 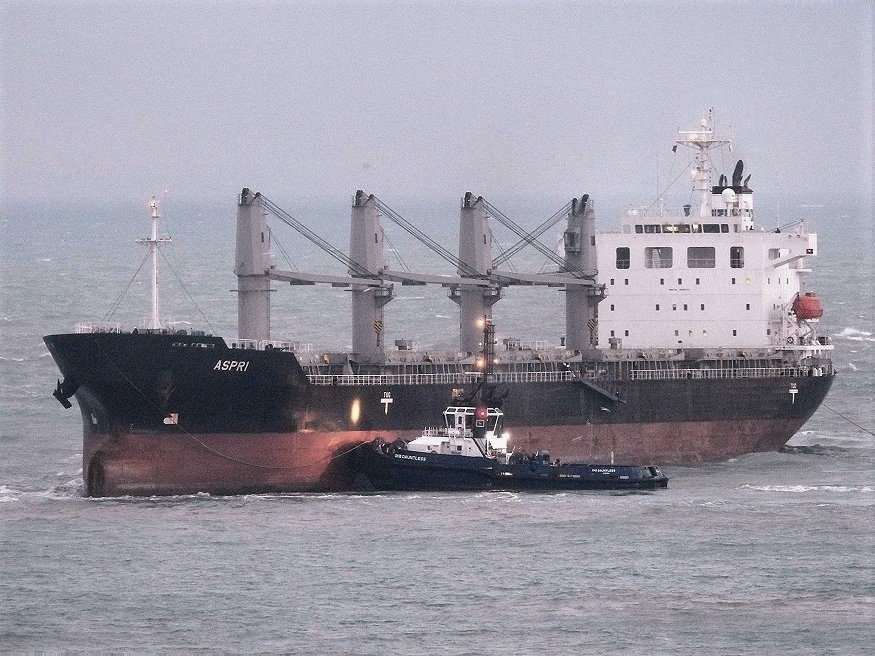 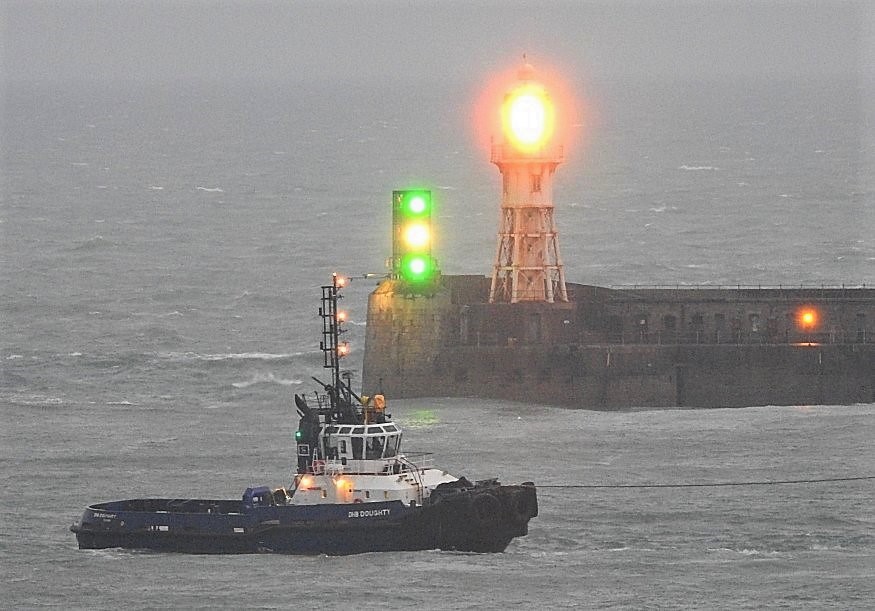 As promised there we are with the two further pictures of the Aspri departure. The rain was easing in the top shot which helped somewhat with the clarity although it was getting darker by then, but in picture two, taken a tad earlier, you can see how wet it is/was as the working lights behind tug Doughty blurrrr in the rain...
See also below... 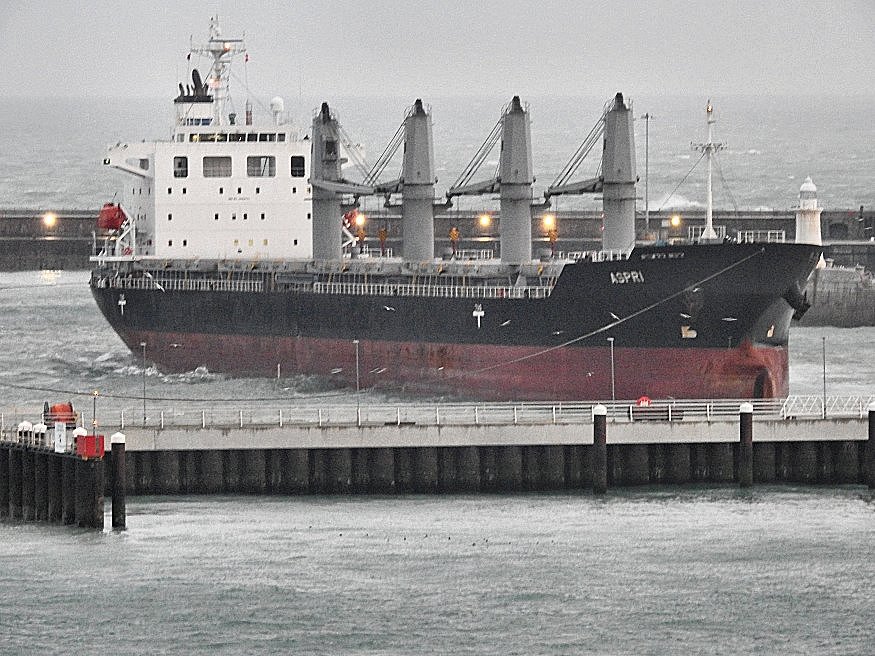 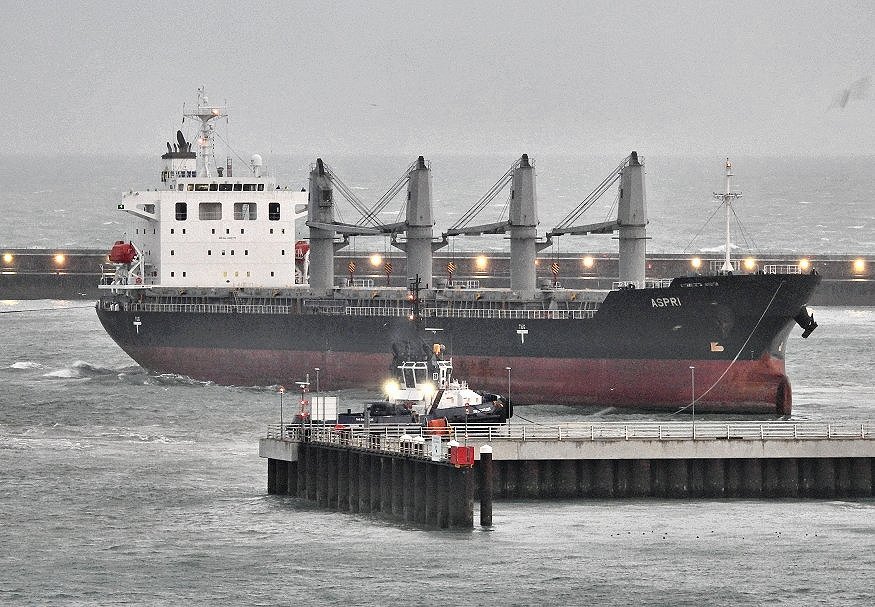 ASPRI : above there we have bulk carrier Aspri pulling away from pier WD4 on Friday night in the rain. It was dark and gloomy and of course...wet, time of pictures 6pm (Mar 11). We will have another pic or two of this following along in due course...we notice on AIS that the vessel is currently at anchor to the east of Port close to Deal. 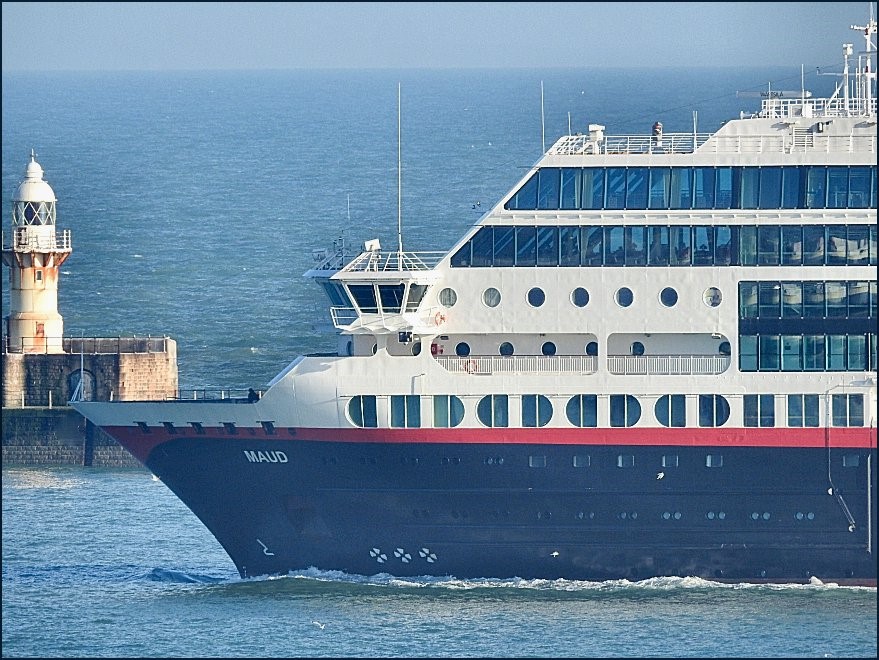 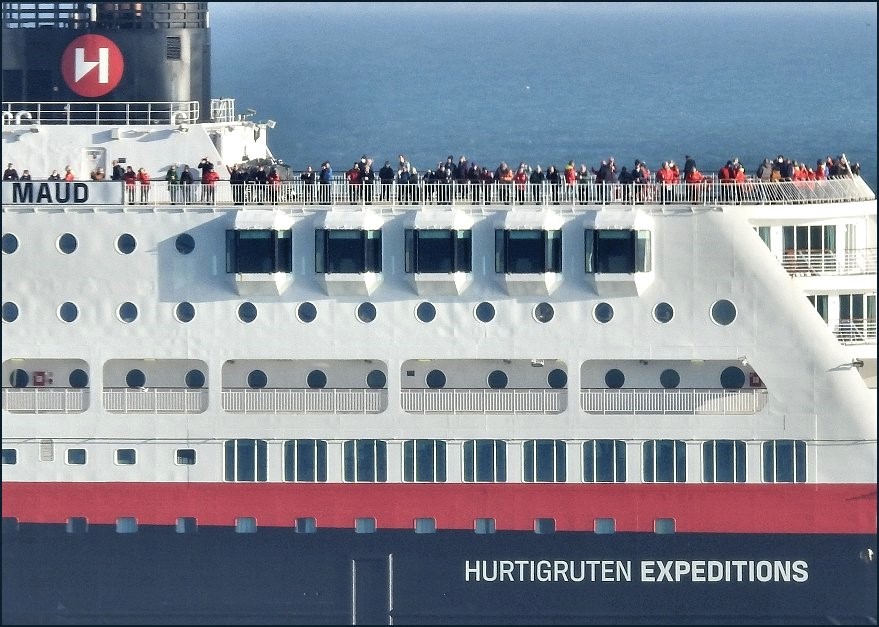 Hurtigruten's Maud leaving the Port of Dover on Wednesday evening (Mar 9) ...setting off on another northbound expedition to the fascinating Fjords and beyond. You can see the joyous passengers there, all suitably attired in well padded anoraks .... should be good...

ps: Aspri left the Port later last evening after a long stay...we will have some pix of her rainy departure in due course... 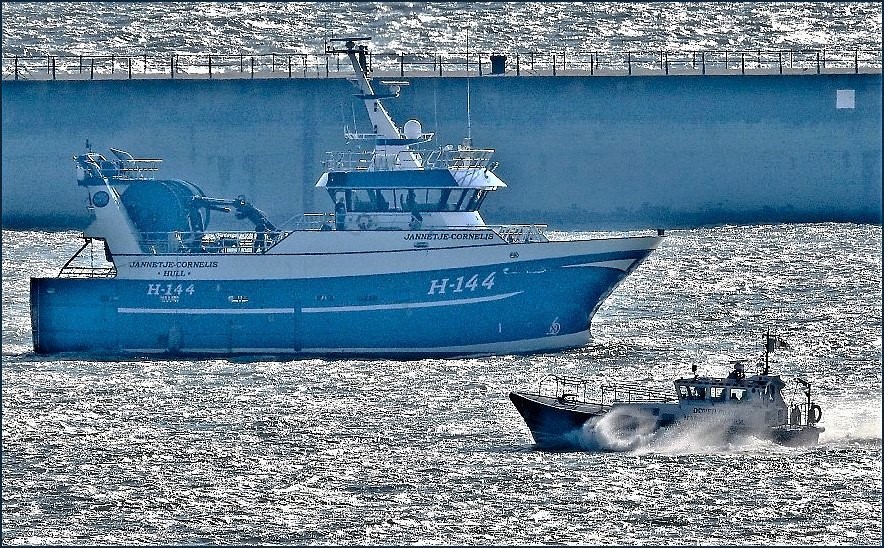 There we are with the second of the trawlers from a few days ago (Monday March 7th), there were four all in all, but we just captured two with the old Nikon. This one above is Jannetje Cornelis...as you can see Jannetje was already across the harbour and in the blinding sunlight on the water, which was almost too much for said camera, however we managed to recover something passable with the computers help...and there we are above.

In the previous post we saw Nederland Stream (formerly Nederland Reefer) just creeping into shot in the background. Well here she is below having made her way round...the pilot boat in the shot above is dashing at speed to her assistance. Look at that natural circle in the pilot's speed-generated spray...reminds you of those guys who can blow smoke circles with their cigarettes! .... 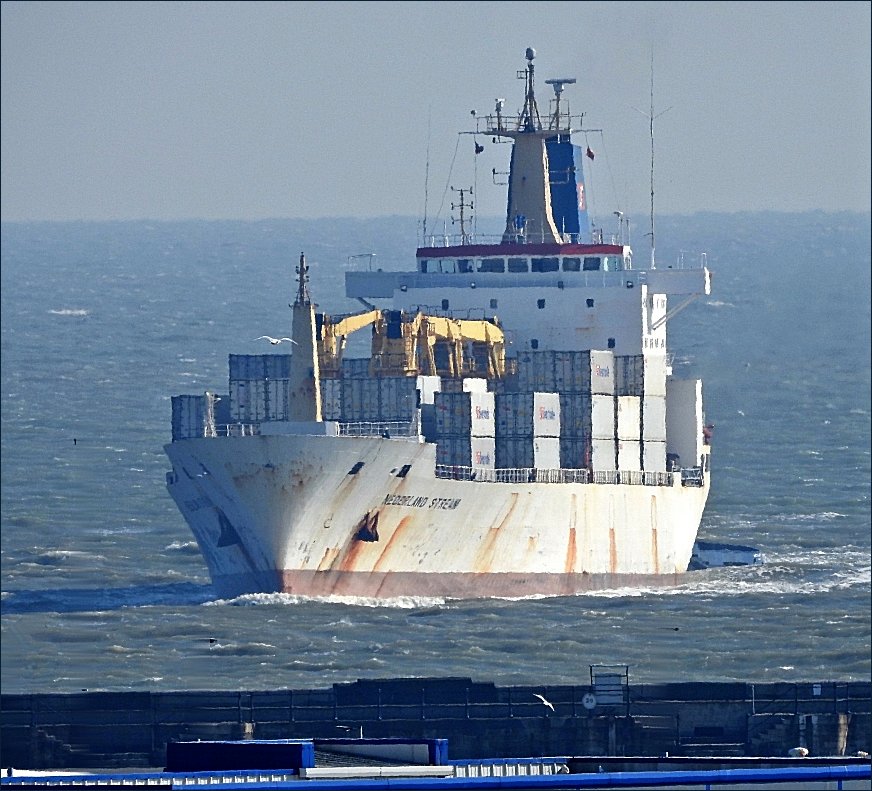 Post 7141
Sea News, Dover
More Fishing Trawlers...
We've seen some terrific trawlers in the past few weeks, some showing down the page or over the page...and on Monday we had four more, this time coming into Port.. We have a couple of pictures of the Louwe Senior which we understand is a Dutch trawler...not entirely sure what's going on re all the trawlers but keep them trawlers coming!...
....anyway, here she is entering Port. ( in the background you can just see the Dover bound Nederland Stream creeping into shot ) 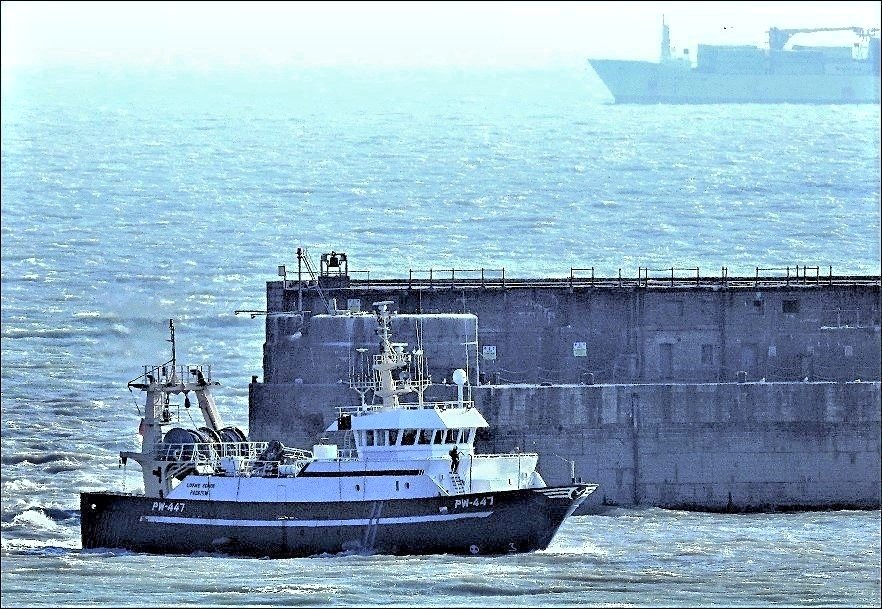 The second pic below was taken a few moments earlier...we may have over-cropped this one... 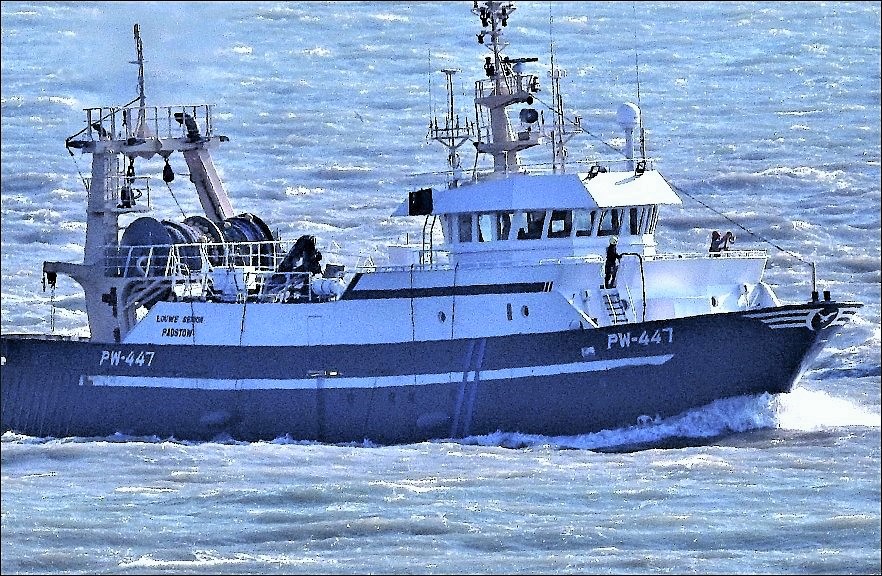 We may have another trawler but when spotted 'twas already in the blinding light on the water...working on it... 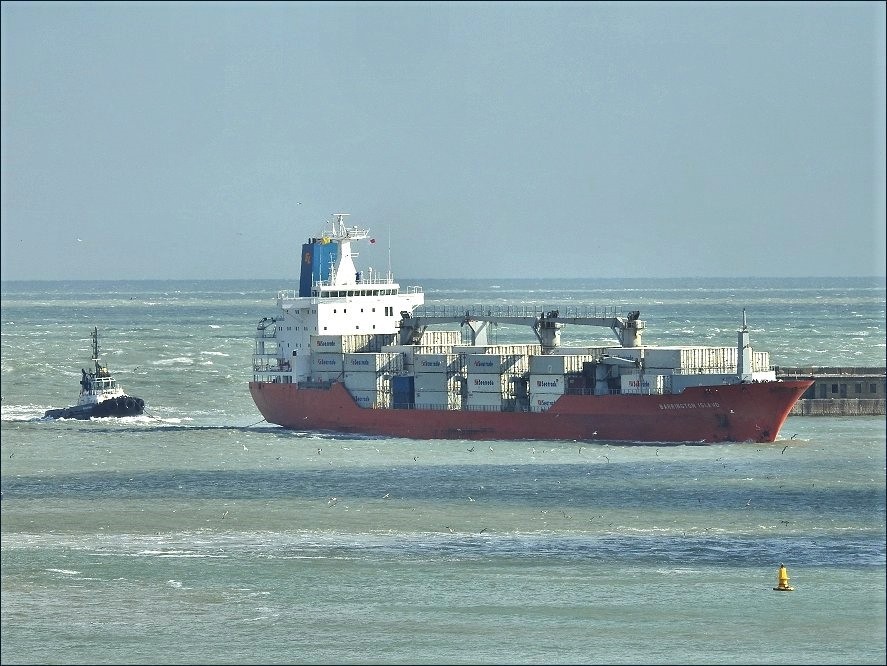 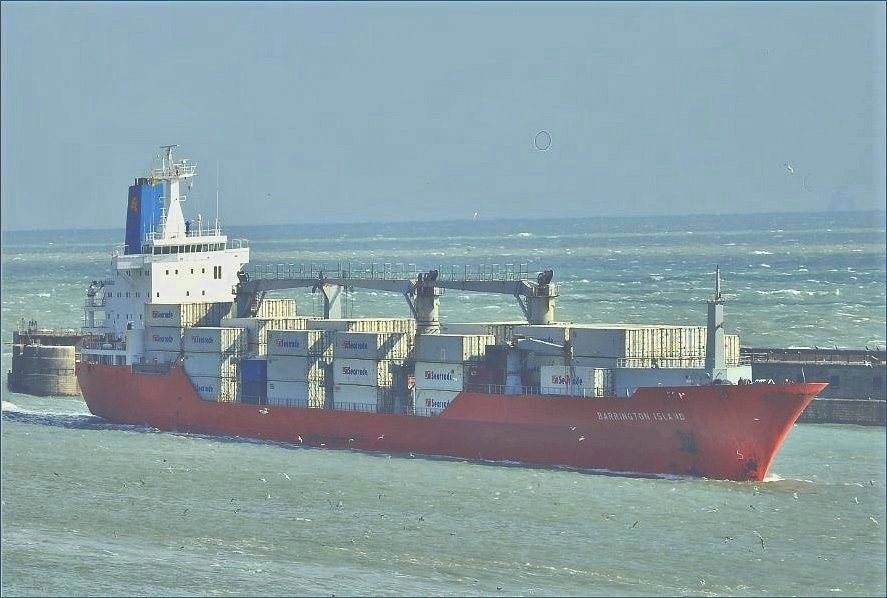 The pix today show the reefer Barrington Island arriving with us here in Dover last Sunday March 6, we briefly had some fairly nice fresh weather as you can see.... always helps with the photos... The super quick turnaround at the cargo terminal here continues as Barrington is already in Vlissingen in the Netherlands...

Sunday also marked the 35th anniversary of the unbearably sad loss of the Herald of Free Enterprise. 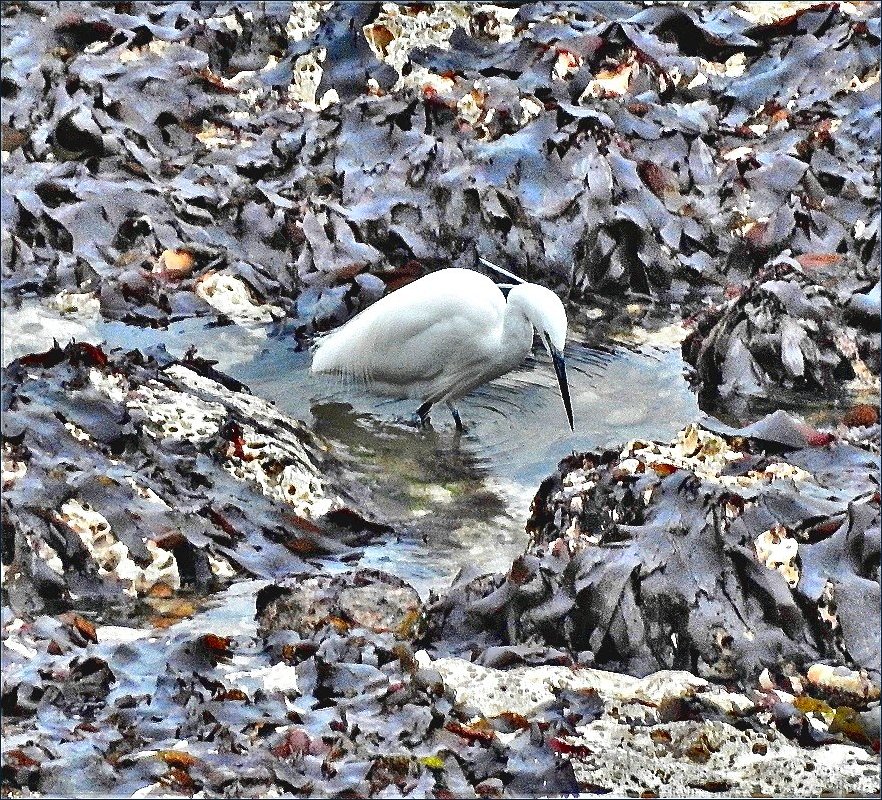 This delightful guy was yesterday rummaging, foraging, through the storm tossed salad of seaweed here on Dover Beach. We're not even sure which particular bird it is .. but.. very nice to see. His foraging was successful too as he scoffed lots of seemingly enjoyable nibbles. The picture isn't the best but he took off heading inland before we could regroup with the old Nikon. (Editor's Update: My animal-loving grandson Harry age 4 tells me it may be an Egret...so there...) 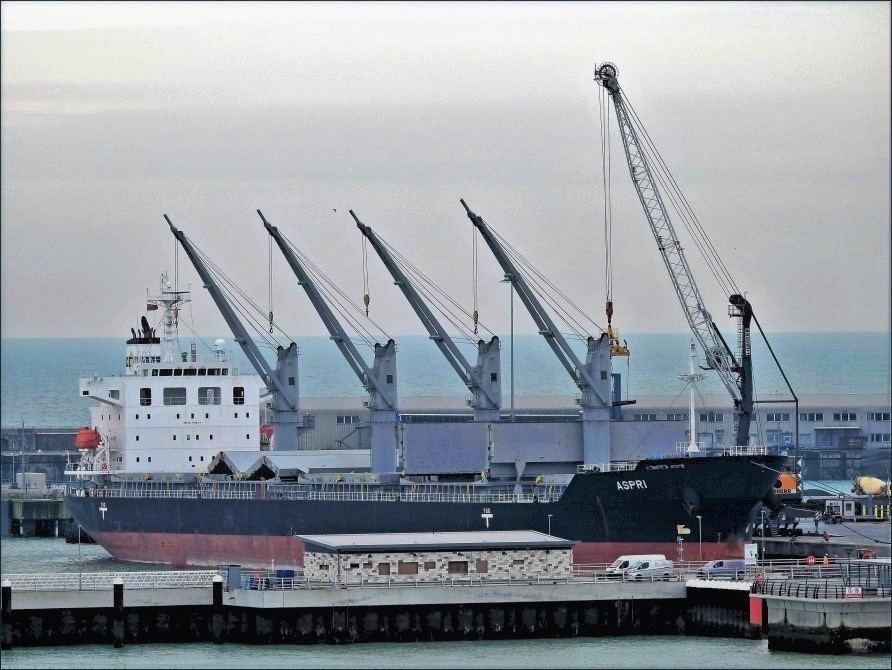 The aforementioned Aspri unloading at the WD4 cargo terminal Port of Dover....on a grey day... she has been in Port a week approx as we write, having come from Waterford in the Irish Republic.....
.....oddly and ironically we now have a strategically placed 'bicycle shed' right in our camera's line of fire, can you see, of all the places to put it !! ...still, we can probably work round it. 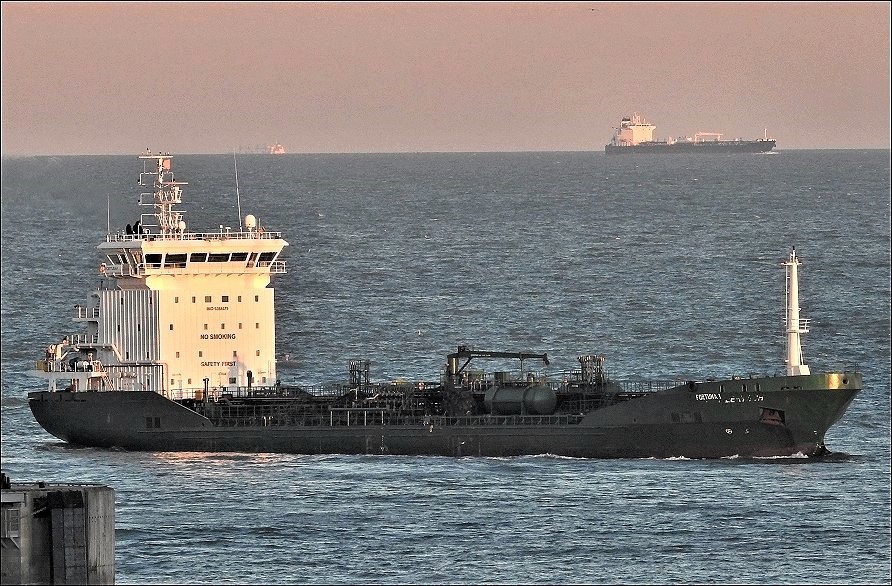 Following along from the pix below....we're Just briefly slipping back to Fortuna 1 again and we see her above entering the Port late-in-the-day Sunday 27 Feb to carry out her overnight bunkering services with Aspri ...
and in the post below we see Fortuna leaving early the following morning.. 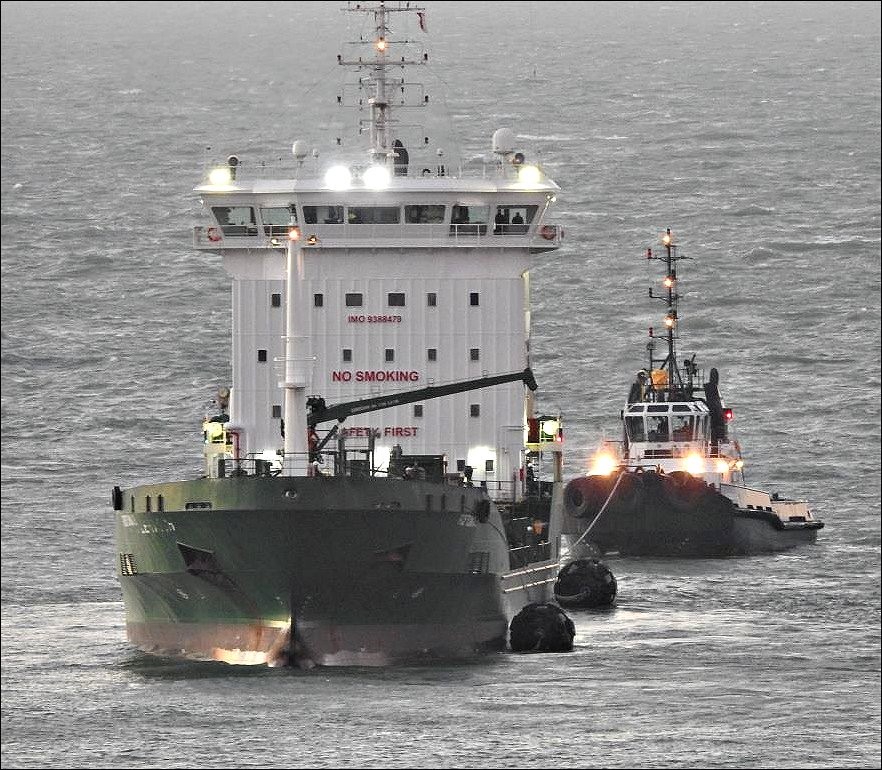 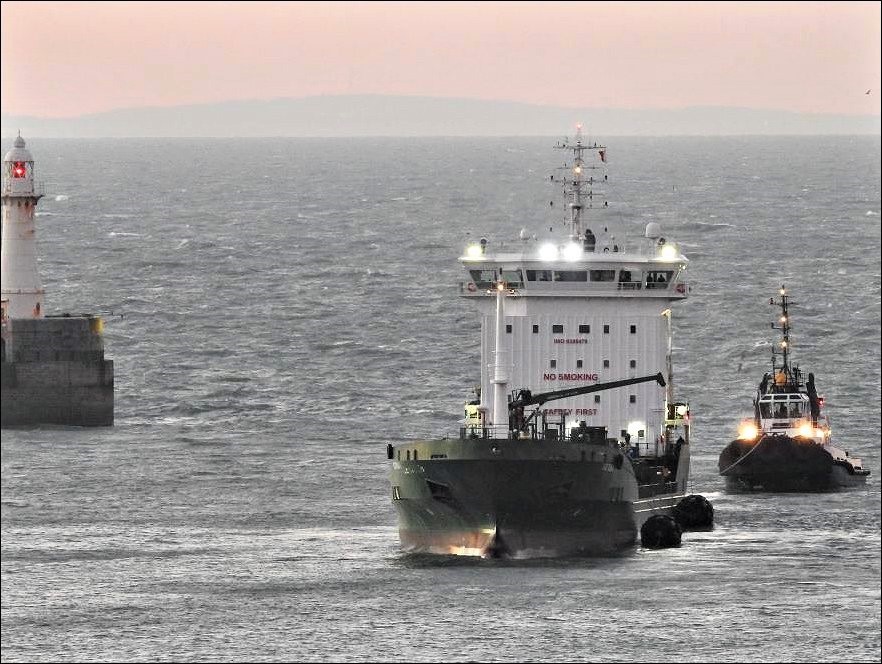 Pictures today show chemical tanker Fortuna 1...the pictures were taken at 06.30 on Feb 28. They show the vessel moving away very early morn with the tug's help, she had been servicing cargo ship Aspri overnight. Aspri is at the second cargo terminal WD4 currently. Fortuna 1 was alongside Aspri overnight and you can still see the fenders attached at the side of ship there. We will have a pic of Aspri coming soon. 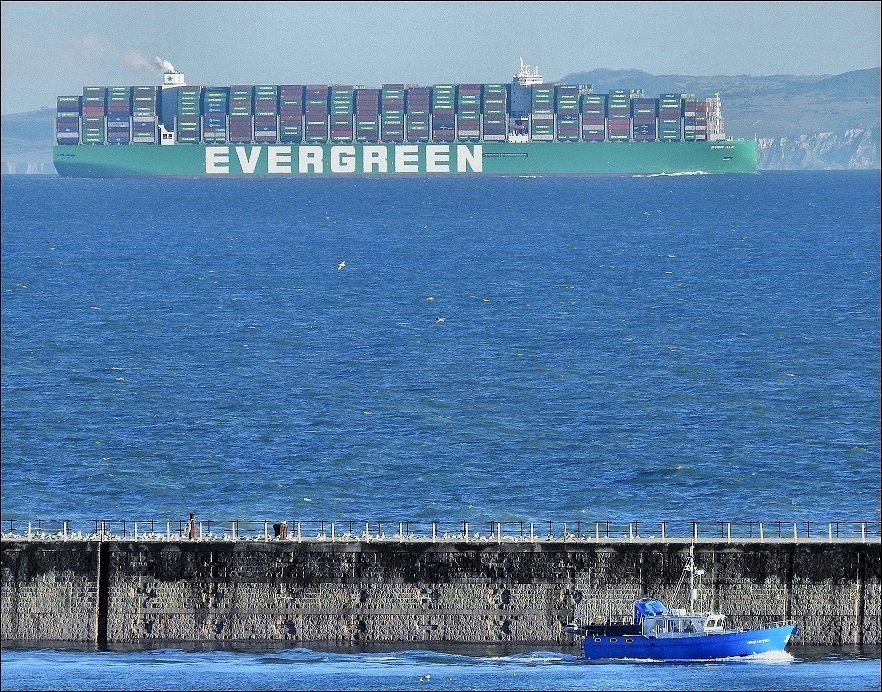 The magnificent Evergreen monster called Ever Alp, one of the world's biggest container ships, passing down the Channel a few days ago ( Feb 26 4.30pm), on her way to Port Said in Egypt having departed Rotterdam a short time earlier...something close to 240,000 tons of commercial muscle on view there. Great to see it. And looking down the shot...close in we have High Hopes ( dont we all in the current climate ) arriving in Port here, an attractive vessel currently used for diving we understand. 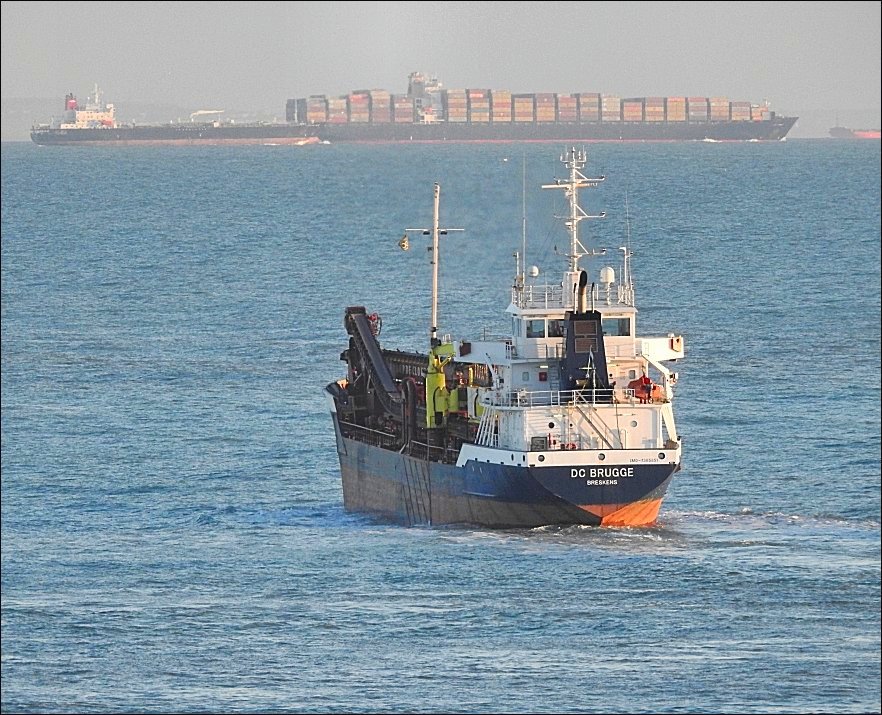 As promised a couple of extra more distant shots here of dredger DC Brugge as she sets out. Top shot there shows her moving away in the channel and about to meet the infamous channel traffic ahead... all's well..

While below a short time later, we zoom in, maybe 'tis a wee bit over-zoomed.... but you can see the accompanying pilot boat and in the distance the Varne Lightship and the French hills ... and then... she's gone.. 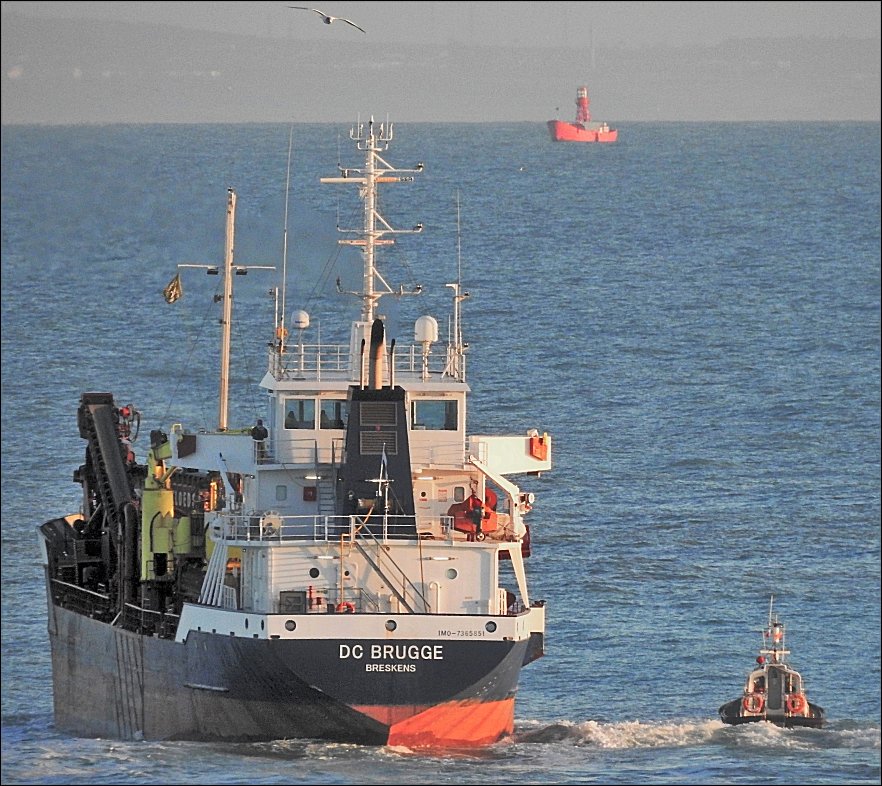 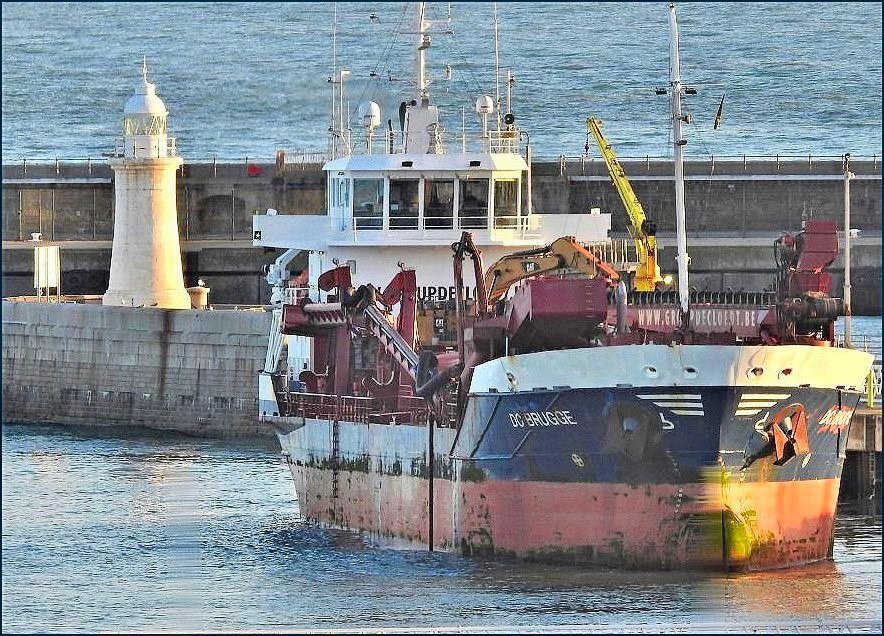 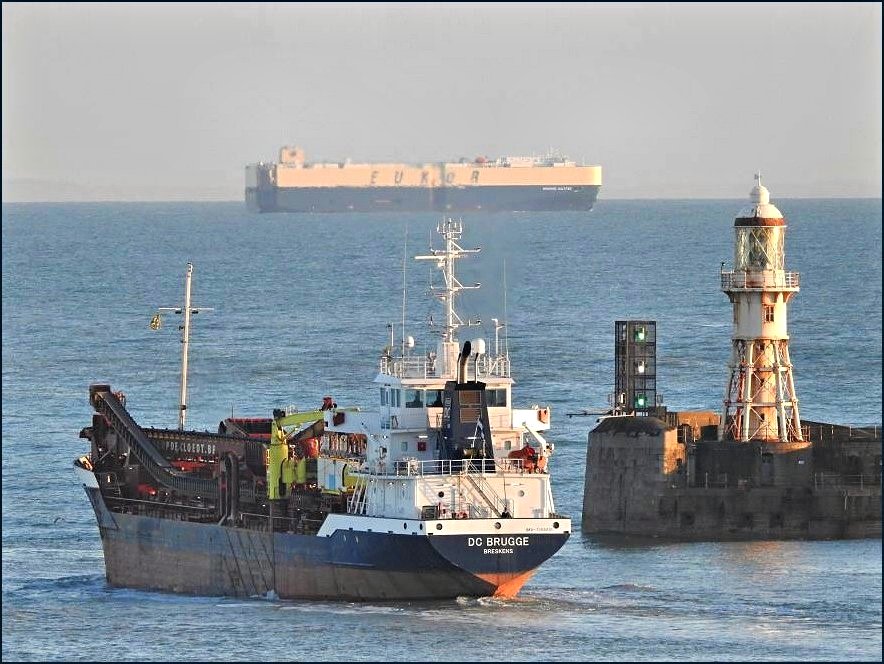 The pictures above show the dredger DC Brugge moving away from the Port on Friday evening round about 5pm. The top shot shows the vessel as she pulls away from 'extra' cargo pier WD5 in the weakening sun, and in the next we see her exiting the Port for pastures new. We may have an extra pic of this one further out...just checking through the pix as we speak.....
...ps: in the background there in shot 2 we have the jollily named Morning Calypso ... a vehicle carrier... 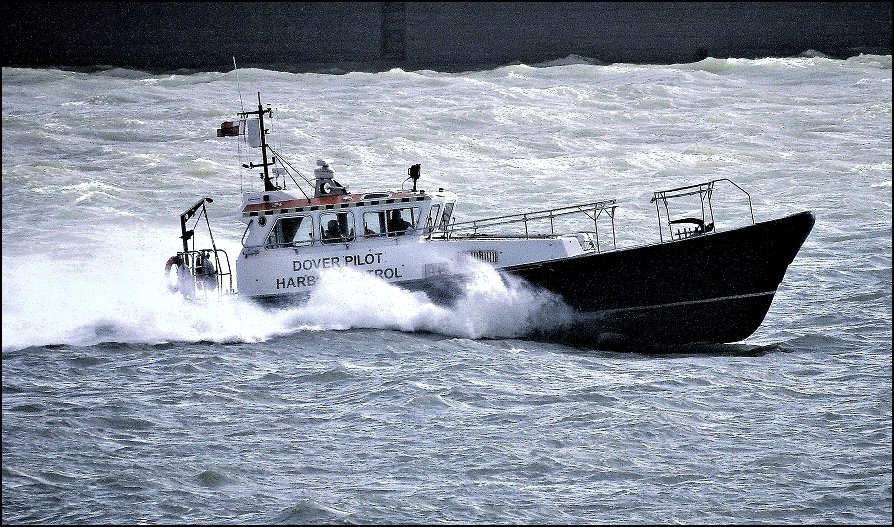 The pilot powers across the harbour at some speed in the recent rough weather, 'twas a pretty hectic time all round as we know.... you can see that above there...
While below we see the reefer Albemarle Island manoeuvring into position at the new and super efficient Cargo Terminal (WD5) here at the Port of Dover. 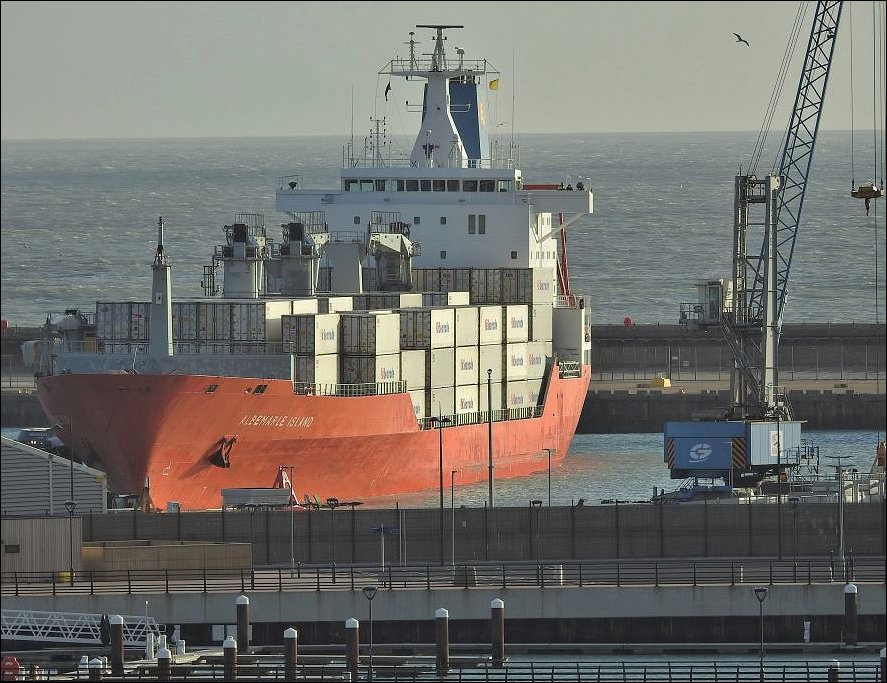 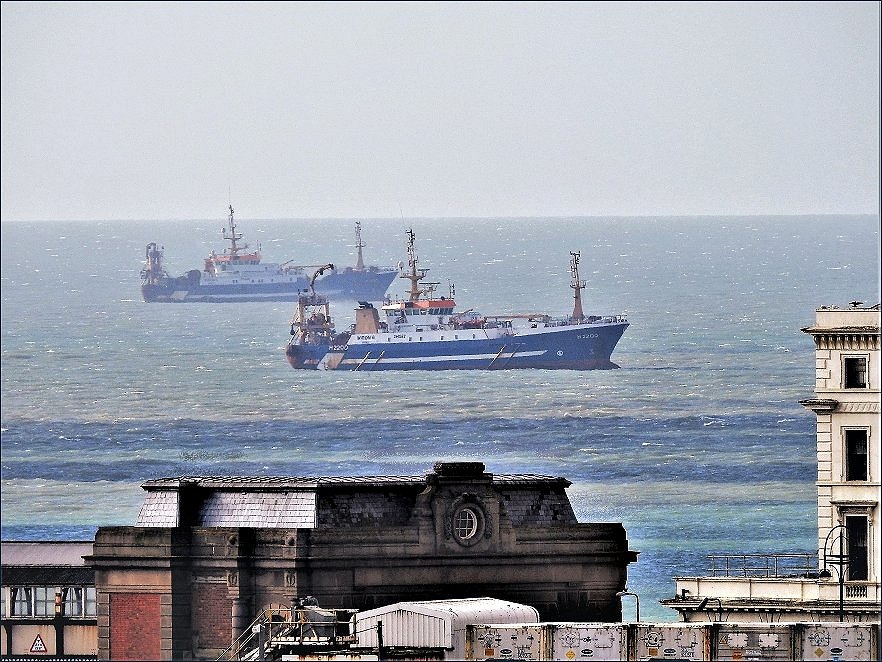 Just following on from the post below, and although this latest pic above needed a bit of work, we just want to add it to show the trawlers in relation to the Port...you can see how close-in they were...as in the foreground you can just see the dark sombre facade of the old Port railway station, Dover Marine, plus to the right we have Lord Warden House creeping into shot. 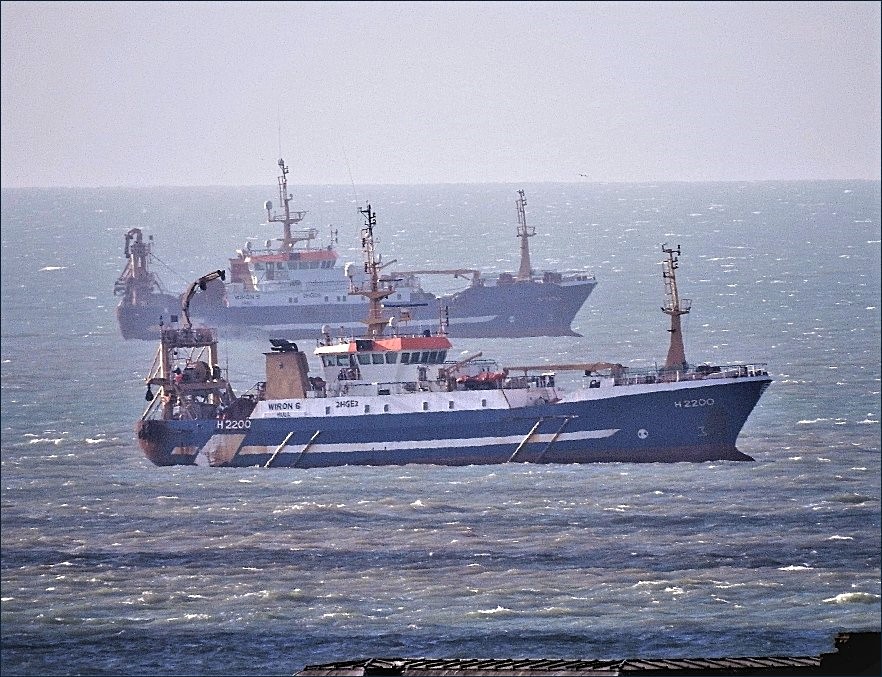 Great to see more fishing trawlers again...these two photographed just off the Port of Dover yesterday Wed 23 Feb, just off Shakespeare Cliff area. You might remember we had a visit from a similar set of near-identical trawlers about two/three weeks ago ( see post 7107 now over on page 2 , when another two of these fishing vessels also came close to Port, although we just got a shot of one of them, the second had just slipped out of view.. but yes see 7107). Not entirely sure why this is happening...have we suddenly become a desirable fishing ground, or ermmm possibly not....
Wiron 6 H2200 and further away Wiron 5 ph1100